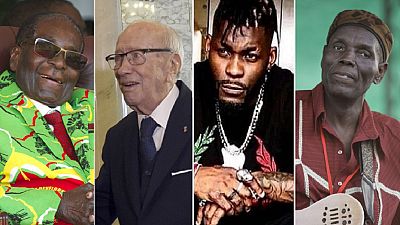 Death played a newsy role across Africa in 2019 as it always has in the years gone past. Last year we profiled about seven high profile deaths that shook the continent.

From the death in early 2018 of South African jazz icon Hugh Masekela through to the passing of Shehu Shagari, Nigeria’s first executive president late in the year.

From north through to West and South Africa, prominent persons died in the course of the year along with the hundreds if not thousands that died from humanitarian disasters, armed conflict, diseases (Ebola, Malaria, Measles) even from state brutality in some cases.

Mugabe to Mtukudzi, perhaps Zimbabwe was one of the worse hit in 2019 along with Tunisia that lost a sitting and an exiled president. Gambia lost a former president and the music industry across Francophone Africa lost DJ Arafat. Who else made our list of 2019 deaths?

Later in July, Kenya was hit by yet another high profile death when legislator, Ken Okoth, succumbed to colorectal cancer. Okoth, till his death represented the Kibra constituency for 11 years, he had returned from five months of medical leave in France before he died.

Local newspaper, Daily Nation said at the time that Okoth was put on life support at Nairobi hospital where he was admitted. ‘‘We want to inform the nation, the people of Kibra, that the leader they trust, a servant leader, Hon Ken Okoth is no more,” Okoth’s brother Imran Okoth said.

Colorectal cancer, also known as bowel cancer and colon cancer, is the development of cancer from the colon or rectum (parts of the large intestine).

Literary fans all over the world are paying tribute to Binyavanga Wainaina, the award-winning Kenyan writer who died aged 48.

Wainaina challenged stereotypes of Africa with biting satire and took on prejudice by documenting his life as an openly gay man.

The author, essayist and campaigner, who also championed African literature through the Kwani Trust he founded with other writers, passed away in Nairobi, the organisation’s chairman, Tom Maliti, confirmed.

Wainaina won the prestigious Caine Prize for African Writing in 2002 for his short story collection “Discovering Home” and went on to set up Kwani, a literary journal dedicated to publishing new writers from Africa.

Former Egyptian president Mohamed Mursi died in court, state television reported back in June. It said Mursi had fainted after a court session and died afterwards.

Mursi, a top figure in the Muslim Brotherhood, was toppled by the military in 2013 after mass protests against this rule. He had been serving a seven-year sentence for falsifying his candidacy application for the 2012 presidential race.

In March 2018, a panel of British politicians and lawyers warned that Morsi’s prison conditions were poor and could lead to his early death. Morsi had also complained about being denied treatment for diabetes.

An engineer by profession, Morsi’s short time in office marked Egypt’s brief experiment with democracy. As analysts began to tout his tenure as a success for the Arab spring, the army struck effectively snatching the country back from civilians.

General Ahmed Gaïd Salah, until Monday, December 23, Chief of Staff of the Army in Algeria and Deputy Minister of National Defense.

His death was confirmed via a dispatch from the Algeria Press Service agency, which in turn quoted a release from the presidency of the Republic. “He was struck on Monday by a heart attack at the age of 79,” Algéria’s Press Service said.

Since the toppling of President Abdelaziz Bouteflika, the general has openly assumed the reality of power, until the election on 12 December of Abdelmadjid Tebboune as the new head of state.

He was widely reputed as one of the pillars of the regime and with that, one of the most powerful men in Algeria.

However, Algerians continued to demonstrate to demand the departure of the entire ruling elites and a lesser grip of the military on the country’s political sphere.

2019 kicked off on a rather sad note for Africa but especially for Zimbabwe with the death of Oliver “Tuku” Mtukudzi. Multiple local media portals reported his demise on Wednesday, January 23.

The state-owned Herald said he was 66. Mtukudzi died after a long diabetes battle. He was pronounced dead at the Avenues Clinic in the capital, Harare.

He was a big deal especially with his guitar. One of his high-profile performances last year was during the burial of former Prime Minister veteran opposition leader, Morgan Tsvangirai.

The deceased was born 22 September 1952 in Highfield area of Harare. Aside music, he was a businessman, philanthropist, human rights activist and UNICEF Goodwill Ambassador for Southern Africa Region.

Mugabe was born in 1924. He grew up and qualified as a teacher by training. In 1964, he was imprisoned by Rhodesian government, he fought a guerilla war that culminated in independence.

Three decades plus later, November 2017, Mugabe loses an intra-party succession battle as the army intervenes and forces him to step down at a time he preferred his wife to take over the reins. His dismissed vice-president at the time returned from exile to take over.

First president of The Gambia, Sir Dawda Kairaba Jawara, died in August at the age of 95. President Adama Barrow confirmed the incident on his social media handles describing the late president’s passing as “indeed a great loss to the country in particular and humanity in general.”

Jawara is celebrated in the tiny West African nation as an independence hero having led the country’s liberation from British rule in 1965.

He first served as Gambian Prime Minister between 1965 and 1970 before he was democratically elected as President. He was ousted in 1994 in a bloodless coup led by then 23-year-old Yahya Jammeh.

After his overthrow in 1994, Jawara left the country to the United Kingdom and only returned in 2002. Jammeh became the second President of the Gambia, whiles his successor, Adama Barrow is the third.

Jammeh, now exiled in Equatorial Guinea, will go on to transit from a military ruler to a civilian leader under the Alliance for Patriotic Reorientation and Construction, (APRC). He ruled the country for 22 years winning 4 elections during the period.

Tunisia’s first post-Arab Spring president Beji Caid Essebsi died in July, a statement from the presidency confirmed. Essebsi, who was 92 years old, was taken to a military hospital in the capital Tunis where he died.

A leading figure in the country’s fortunes since 2011, Essebsi was hospitalized late June and spent a week in hospital after suffering what authorities described as a severe health crisis.

“On Thursday morning, the President of the Republic died at the military hospital in Tunis.. The burial ceremony will be announced later,” the presidency said in statement at the time.

The country has since voted in a new president in the person of former varsity professor Kais Saied.

Before his ouster in 2011, Ben Ali led the North African country for 23 years and was credited with delivering stability and some economic prosperity. But he received widespread criticism for suppressing political freedoms and for widespread corruption.

His ouster was brought on by mass street protests that went ahead to trigger a number of “overthrows” in what became known as the Arab Spring. He fled to Saudi Arabia where he lived till his death.

Incidentally, he had announced an imminent return months before his death. His immediate successor was Beji Caid Essebsi who died in July after announcing that he was not going to seek another term in office.

It was a death that hit Ivory Coast but whose impact extended across much of Francophone Africa. The death of famed music icon, DJ Arafat.

The 33-year-old died in August killed in a motorcycle accident in the capital Abidjan. He was credited as the originator of the coupé-décalé genre of music.

DJ Arafat, his real name Houon Ange Didier, received a big burial that was preceded by a concert attended by heavyweights in African music among others Fally Ipupa, Maître Gims, Davido, Sidiki Diabaté and Koffi Olomide.

The national stadium was given by government for the purpose of the funeral following an online petition but the funeral turned sour when some fans forcibly open the coffin at the final burial grounds. Police have since arrested about 11 offenders.

Some other deaths worth noting: