Conserving rhinos: 'Sides of A Horn' film premieres in Uganda 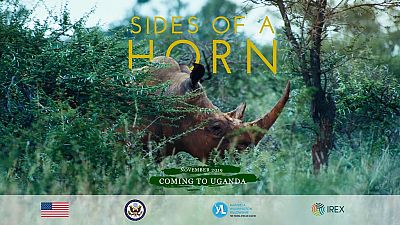 Conservation enthusiasts in Uganda celebrated the premiere of a historic wildlife film, ‘Sides of a Horn’ which highlights the conflict between poachers and game rangers in communities.

The film launch held on Thursday at the Speke Resort Hotel in Kampala, is part of a two-week long campaign to engage communities in Uganda on the best ways of conserving wildlife.

Shaban Senyange, a conservation specialist in Uganda, teamed up with the film’s producers Toby Wosskow and Kevin Wolf, to bring the film to the East African country.

It's not just rhino and other animal lives at stake, it's also human lives.

‘‘I hope to facilitate dialogue between the government and local communities regarding the utilisation of wildlife resources and the fight against illegal wildlife poaching,’‘ Senyange told journalists ahead of the film premiere.

‘‘No other filmmakers have given a voice to the people at the heart of the issue. The people in the communities, near these protected areas. That’s why I wanted to make a film,’‘ Wosskow explained.

Toby Wasskow speaks on what inspired the movie and how much he has and is still enjoying Uganda. #SOAHUG rhinofunduganda pic.twitter.com/Xs2BU1CKFL

The film, whose executive producer is billionaire philanthropist Richard Branson, has been premiered across the world, including in the United States and South Africa.

‘‘You cannot talk about poaching without talking about poverty, inequality, or corruption. The suffering of the animals is closely linked to the suffering of people, and Toby really brings that across,’‘ Branson said when asked about the decision to present the story as fiction.

ALSO READ: The barefoot ranger protecting animals he once poached

Branson, along with the other film’s partners, Africa Wildlife Foundation and WildAid, hope that Sides of A Horn, can enhance awareness and support for communities at the heart of the fight against poaching.

Rhinos have existed for 50 million years, and yet at the current rate of poaching, the iconic animal may be extinct in the next 10 years.

This extinction is fueled by the demand for rhino horn, which sellers and buyers claim can treat impotence, cancer, fever and hangovers among other ailments.

In reality, rhino horn which is primarily composed of keratin, the same protein found in human hair and fingernails, does not have any unique medicinal value.

This 17-minute short film tells the story of two brothers-in-law, who find themselves on opposite sides, as one tries to kill a rhino, and the other tries to save it.

Wosskow, who was inspired by his visit to South Africa in 2016, says he sought to show that illegal wildlife hunting, is not only driving the extinction of rhinos, but is also driving communities apart.

‘‘This tension is escalating between rangers and poachers. It’s not just rhino and other animal lives at stake, it’s also human lives.’‘

The film was shot at the Black Rhino Game Reserve and the nearby township in South Africa.