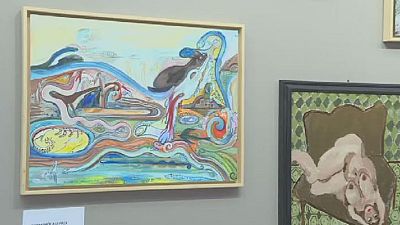 The ‘‘outsider’‘ arts fair hits Paris on the sidelines of the International Contemporary Art Fair. The fair is dedicated to the promotion of self-taught art and newby artists.

Founded in New York in 1993, the 7th edition of this non-conformist fair, brings together some forty exhibitors, including 22 foreign galleries, from Poznan to Marrakech.

“No, it has nothing to do with the International fair of contemporary art. There is contemporary art next door, there is the ‘‘outsider’‘ art and we can associate them together. I was the first to do so too, but as totally different entities. It is a dialogue on different levels. It’s as if you were telling me about an African mask and then a Picasso painting. You can put them side by side, but you’re not going to make any analogies”, said Martine Lusadry, Director of the Halle saint Pierre museum in Paris.

There is less elitism in the outsider art.

The very existence of the fair shows self-taught artistic creations, from various places, are of interest to amateurs and collectors everywhere.

“Mainstream institutions in the last 10 years, 20 years, Venice Biennale, Metropolitan Museum, Museum of Modern Art in the city of Paris, and many more institutions, are choosing to have major exhibitions of self-taught and outside artists, which has stimulated the market for these works”, owner of the Outsider arts fair, Andrew Edlin said.

For Bruno Decharme, Outsider art collector, “there is less elitism (in the outsider art). Nevertheless, it is an art that is anchored in a sort of popular tradition since most of these people come from rather modest backgrounds. So there is a kind of immediate perception that is actually simpler, that’s for sure.’‘

Outsider Art, also referred to as “extraordinary art”, sells “from 300 to 800,000 euros for established artists such as American Henry Darger”.