Double harvest: Maasai women keep bees and get to conserve their environment 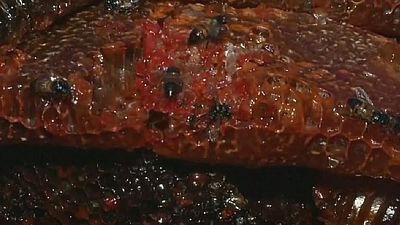 At night the women on the Maasai Steppe are busy with their harvest.

One by one hives stored in the branches of the trees are lowered to the ground and the honeycomb carefully removed.

The hives are then again restored high up in the canopy.

The Steppe itself is massive stretching from the Usambara to the Great Rift Valley across the borders of Kenya to Ethiopia.

This bee keeping initiative is focussed in the area outside the Tarangire National Park in Tanzania.

Most of the people who live here are Maasai, many are are now semi nomadic, raising cattle in the traditions which have lasted for centuries.

The women own and run their bee keeping operation as a business. Their initial funding in the form of micro grants and training comes from a non-profit organisation called African Wildlife and People (AWP).

The idea is that the women don’t repay the organisation from the sale of their honey, but instead they agree to a commit their time and energies to conservation work.

This can be tree planting, village cleanups, or environmental education where the women go to schools and villages to talk about environmental problems and conservation.

According to AWP attitudes towards conservation improves if local people are involved in these activities.

He says: “Beekeeping is important for this Maasai community because they’ve demonstrated hard work and a long history of protecting the environment. Therefore, the beekeeping project is a venture that protects their environment while also securing some income for them, for their needs through selling honey and other beekeeping products.

According to Beah: “The objective of this project is both conservation and generating income from the environment.”

AWB believes rural women are the best to spread the messenge for sustainable development it argues is critical to long-term conservation success.

It says almost 1200 women are involved with the schemes and there are now more than 1300 hives being planted in the wild bush for harvesting.

Other programs are aimed at reducing the conflict between people and wild animals so that they aren’t hunted. One of these is planting trees to make a natural fence around villages.

Bee keeper Endesh Melau confirms: “We do training and we have been trained on how to harvest honey and how to wear these clothes, as you can see.”

The scheme is already popular in Melau’s village.

She says: “In Netolia village (Arusha region) there are forty of us women. There are elderly mothers, there are middle-aged mothers, (and) there are youths.”

Creating financial opportunities for sustainable businesses also means people are less likely to be competing with wild animals to survive.

The bee keeping project began in 2014 and the women .

According to Laly LIchtenfeld, a biologist and co-founder of African People and Wildlife, the growth of the harvest in that time has been considerable.

Lichtenfeld says: “The women are hanging beehives out in the wild bush, in trees and they’re harvesting honey. They’ve harvested over about seven tons of honey to date.”

It makes sense to set up hives because Tanzanian law protects land surrounding them.

“You can’t cut down the tree and you can’t cultivate in the vicinity of the hive because the goal is wild pollination and maintaining spaces for wild bees and wild flowers across these beautiful ecosystems,” says LIchtenfeld.

The women sell their honey through wholesale to markets in Arusha.

They hope as their businesses grow, so too will the bush which sustains the wildlife.