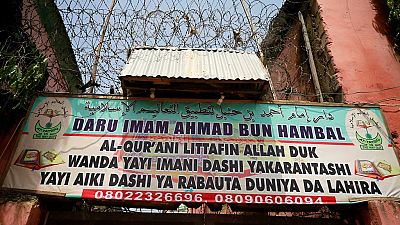 Nigeria’s government is under pressure to regulate the activities of Islamic schools, following the raid and rescue of over 300 boys and men from a building that purported to be an Islamic school in the northern part of the country.

Islamic schools, known as Almajiris, are common across the mostly Muslim north of Nigeria, and the Muslim Rights Concern (MURIC), a local organisation, estimates about 10 million children attend Islamic schools in the north.

Parents in northern Nigeria, the poorest part of a country in which most people live on less than $2 a day, often opt to leave their children to board at the schools.

Any necessary ban on Almajiri would follow due process and consultation with relevant authorities.

Such schools have for years been dogged by allegations of abuse and accusations that some children have been forced to beg on the streets of cities in the north.

Horror stories are emerging about life in a two-storey house in Nigeria’s northern city of Kaduna as the authorities try to find families of the victims who often spent years at the site.

Police arrested seven adults in the raid on the building, which had a sign in Arabic at the entrance declaring itself “House of Imam Ahmad Bin Hanbal for the Application of Islamic Teachings”.

Some parents paid fees, believing it was an Islamic school. Some described it as a good institution and dismissed talk of abuse. Others saw it as a correctional facility. Police and regional officials said it was not registered as either.

Reuters spoke with seven victims and five parents of those who had been inside, withholding their full names to protect their privacy.

All the victims said beatings were regular and said children and men were frequently shackled. Days were dark, long and hungry: food was only served at 10 a.m. and 11 p.m.

At the Kaduna institution, relatives were not allowed to see boys for three months after admission and had limited visiting rights after that, parents and children said. Punishment was swift for those who talked of any abuse, boys said.

“If anyone tried to tell their family, they would be hung up from a wall or put in chains,” said 14-year-old Umar, whose grandfather sent him to the facility two years ago for skipping school.

Police said they found several boys and men in chains. Reuters filmed victims in chains on Thursday after the raid. Some boys said they were shackled to broken power generators, which they dragged around, including to bed or the bathroom.

Earlier this year, the government of President Muhammadu Buhari, himself a Muslim, said it planned to eventually ban the schools, but would not do so immediately.

“Any necessary ban on Almajiri would follow due process and consultation with relevant authorities,” said Buhari’s spokesman Garba Shehu in a statement issued in June.

“The federal government wants a situation where every child of primary school age is in school rather than begging on the streets during school hours,” the statement said.

A presidency spokesman did not immediately respond to calls and text messages seeking comment on the raid in Kaduna and whether it would alter the government’s approach to such schools.

In defence of Islamic schools

“Those responsible for abuse, if found guilty, should be held accountable but these schools should continue because shutting them down would deprive so many students of an education,” he said.

With few options, some parents defended the Kaduna institution, which charged fees of 35,000 naira ($114) a term.

“There is no problem in this school,” said a woman who only gave her name as Zainab, wearing a Muslim veil and speaking outside the locked gates. She said she had seven children at the institution where she cooked meals and had not seen any abuse.

Ahmed Balrabe, a tailor who lives next to the site, said two of his children attended the school and he had never encountered any abuse. “It was good for them, they became calm,” he said. “They showed them how to read the Quran. I liked it.”

Despite mixed accounts about its role, the abuse reported by victims has thrown a spotlight on Nigeria’s struggle to provide enough school places for its rapidly expanding population, leaving a gap for unregulated institutions that poor parents sometimes turn to.

The West African nation’s population will swell from 190 million to 400 million by 2050, according to U.N. figures. Primary education is officially free but about 10.5 million Nigerian children aged five to 14 are not in school.

“The long-term viability of the Nigerian economy – and the state itself – hinges on the government, religious, and traditional institutions developing a plan to address this challenge before it becomes impossible to remedy,” he said.

Prior to Thursday’s police raid, those who made it out of the Kaduna institution were sometimes returned by families. Some parents said they needed to discipline wayward children and others said they were too poor to look after all their kids.

Kaduna state government said there were at least 77 boys under 18 years old held there. The youngest was five.

President Muhammadu Buhari, a Muslim, has sought to encourage school attendance, with programmes that include one offering free school meals that the government says reaches 9.8 million children in 32 of Nigeria’s 36 states.

But Nigeria, an oil producing state whose finances by the government’s admission have been drained by corruption, only spends 0.5% of gross domestic product on health and 1.7% on education, among the lowest worldwide, the International Monetary Fund said.