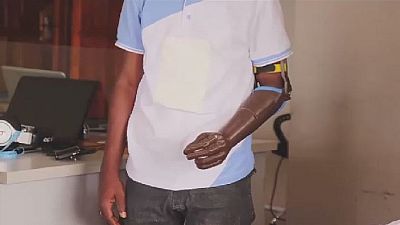 Amputees in Nigeria now have access to 3-D printed prosthetics.

This is thanks to creators at the Northeast Humanitarian and Innovation Hub in Yola, in northern Nigeria.

This hub was set up in 2018 by the government to empower tech enthusiasts to impact lives.

It is not just printing the limbs but also adding robotics to it to improve functionality.

“The lab itself hasn’t really been operational for more than like 2 months and we have already impacted 5…you know 6 kids with limbs including a police officer also who lost his limb in the line of duty. We have also provided a 3D limb for him so it is much cheaper, much much cheaper”, said partner at Northeast humanitarian and innovation hub, Muhammad Ibrahim.

Ahmad Tijani is a founding partner of the lab.

“It is not just printing the limbs but also adding robotics to it to improve functionality. So and with robotics we now have sensors coming in within which model of thoughts is designed and transmitted for the user”, Tijani said.

Muhammed Jafar, 25, lost his left hand in January this year while he was part of a vigilante group, formed to protect his neighbours in Yola.

Jafar helped rescue a teenage girl kidnapped by criminal gang, known for attacking residents and creating insecurity in the city.

His forearm was hacked off by the gang’s members when they later came to attack him. In recent times, Jafar got a fitted new 3-D printed prosthetic arm and nows earns a living as a tailor.

“This limb has helped in reducing the humiliation I used to feel. When I put it on, it covers the part that was cut off from my arm and most people cannot differentiate between the limb and my real arm. It helps me to do some activities”, Jafar said.

The 3D-printed prosthetics offered in Yola would cost about $1,000, but the team has donated over 6 prosthetics in the region.

They have a list of over 100 amputees across the north-east waiting to be fitted.