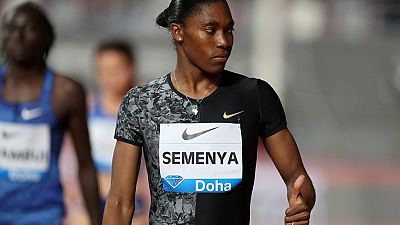 Caster Semenya was invited on Friday to run in an 800m race in Morocco on Sunday after previously saying she had been denied the right to participate in the event but the invitation came too late for her to get there, her agent said.

Double Olympic champion Semenya said on Thursday she had been denied entry into the event in Rabat in apparent violation of a ruling from Switzerland’s high court which has temporarily lifted regulations that would require her to take medication to lower her testosterone levels in order to be allowed to race certain distances.

Speaking to Reuters by phone on Friday, her agent Jukka Harkonen said the lateness of the invitation made it impossible for Semenya to travel to Rabat in time for the race, because it was a journey of more than 20 hours from her home country South Africa.

She’s not running. She was invited today but that was too late.

“She’s not running,” he said. “She was invited today but that was too late.”

Semenya became the centre of heated international debate after a controversial ruling by the Court of Arbitration for Sport (CAS).

The CAS ruled that International Association of Athletics Federations (IAAF) regulations to limit naturally-occurring testosterone in female athletes with differences in sexual development (DSDs), such as Semenya, were needed to ensure fair competition between runners in events ranging from 400 metres to a mile.

The Swiss Federal Tribunal later ordered the IAAF to immediately suspend implementation of the regulations on Semenya, allowing her to compete without restriction, while she appealed against the decision.

On Thursday, Semenya said the tribunal had rejected an IAAF request to reimpose the rules but she had nevertheless had a request to race in the Rabat event denied by the Royal Moroccan Athletics Federation, with no reasons being given.

The IAAF said it had no say in who competed in Diamond League events such as the one in Rabat, to which athletes were invited by the organisers. The BBC reported on Friday that the organiser of the Rabat meeting, Alain Blondel, said Semenya had been invited.