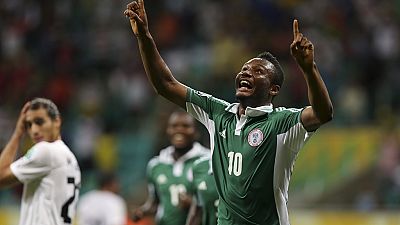 Nigeria’s Nation Cup winning captain Obi Mikel said he is ‘hungry’ to win again, and believes the Super Eagles have a good chance of lifting the top prize in Egypt.

Obi Mikel won his first Africa Cup winners’ medal six years ago in South Africa after finishing third in 2006 and 2010.

In Egypt, he will lead a young team with the bulk of the players making their first appearance at this stage of the competition.

I am hungry to win.

“It will be a tough tournament, but we have quality players, we have trained well. So we have a good chance.”

He has been impressed with the young team who have forged ahead after an early exit at last year’s World Cup in Russia.

“There’s a lot of young players in the team. That’s very good, that means a lot of energy in the team,” said the experienced midfielder, who was not part of the qualifying tournament for this competition after he asked to be left out.

“We have some incredibly talented young players like (Samuel) Chukwueze and Paul (Onuachu). They have to get experience and good enough the coach has given them the opportunity. Hopefully, we are in Egypt to fight because we want to do great things.”

The former Chelsea star made his Eagles debut in August 2005 against Libya, and this tournament may well be his last with the national team.

“Maybe it’s my last one,” he said. “I’m not sure yet, but at some point you have to let go. I don’t want to overstay my welcome. Let’s hope we can make it count.”