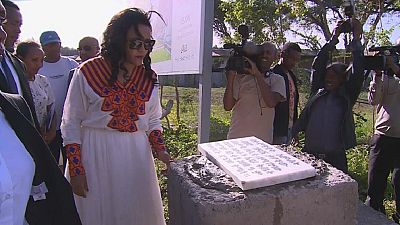 Ethiopia is set to have a special state-of-the-art boarding school for visually impaired persons in the capital Addis Ababa, the state-affiliated FBC reported in Monday.

The facility whose foundation stone was laid in the capital is part of the educational drive being undertaken by first lady Zinash Tayachew.

The FBC report said that the facility was largely benefiting from Emirati philanthropist Fatima bint Mubarak who is an advocate for girl child education in the gulf country.

#Ethiopia: First Lady Zinash Tayachew today laid a foundation stone for a state-of–the-art boarding school to be built in #AddisAbaba for visually impaired individuals with funding from Fatima bint Mubarak, an advocate of education for girls in #Dubai. #UAE pic.twitter.com/gz2owyheIm

Zinash told her fellow first ladies on the sidelines of an African Union meeting in Addis Ababa in February that she was planning to build 20 high schools, 15 of which are under construction.

‘‘I have planned to construct boarding schools for the blind and the disabled. I also support institutions for the elderly and work on similar issues,’‘ Zinash said.

The Office of the First Lady says through her charity work that includes providing support to the ‘disabled and special needs communities’, Zinash has become ‘a hope for so many.’

Present at the sod-cutting ceremony was one of Ethiopia’s most celebrated visually impaired lawyers, Yetnebersh Nigussie. Despite being visually impaired, she strived to get an education and set out to help people with similar challenges.

Nigussie was among the first three visually impaired persons to study law at Ethiopia’s Addis Ababa university. She recalls having to transcribe audio recording of her lectures into Braille throughout her 5-year study.