The Ivorian blind football team is hard at work on the lawn of Abidjan's University.

The team dreams of participating in the Paralympic Olympics to be held in Paris in 2024. Cecifoot is a discipline reserved for the visually impaired.

"Being blind, the beginning was difficult. But as time went on I realised that I still loved the sport I loved in the past, so I just developed another sense and adapted", said footballer Armel Assi Djédjé.

The players are now dreaming of becoming the first team from sub-Saharan Africa to participate in the Paralympic Games in 2024 in Paris.

To achieve this, they will have to finish on the podium of the next African championship, taking place in Morocco in November.

Blind football coach, Christian Atsé, saw a challenge but also an opportunity. "It's a challenge, it's a challenge to take on because of what we saw. There were people who said they wanted to coach the team. When they realised that the players were blind, they simply withdrew. And me, when I was given it, first of all I liked this environment, I said that we had to take up this challenge, allow these young people to show the nation that they had something to offer",

Created in March 2015, the Ivorian national cecifoot team has already participated in two African Nations Cups (CAN) for the blind and visually impaired. 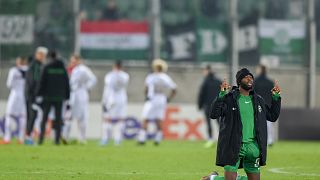