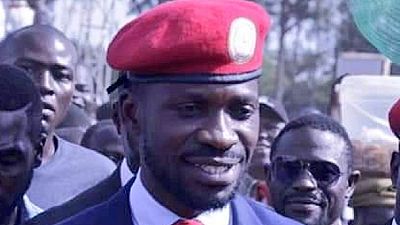 Security forces deployed to keep Ugandan lawmaker and Afro pop star, Bobi Wine, under preventive house arrest were outsmarted on Thursday when he evaded them.

Bobi Wine, real name Robert Kyagulanyi, managed to leave home to attend the funeral of a prominent politician in the town of Busoga in eastern Uganda.

Addressing the crowd at the funeral, he explained why he had to escape the ‘prison’ his house had become, clarifying that he remained a law abiding citizen despite being forced to escape prison.

“I had to come because Busoga is my home. I sneaked out of my home which is now a prison. But I do not support escaping from prison. I am a law-abiding citizen. I got out because it was a violation of the law and against my rights,” he said to cheers.

The police on Tuesday confirmed that Bobi Wine had been placed under preventive house arrest. He had briefly been detained early this week by police before he was escorted to his residence and placed under arrest.

Some colleague lawmakers protested the arrest and threatened at a point to boycott sittings in the parliament. Bobi Wine who is fast establishing himself as a presidential aspirant when next polls are held has been hassled by the government due to his opposition to President Yoweri Museveni.

In the past, his music shows have been cancelled, he has been arrested and reportedly tortured by special forces, his driver shot and killed during a by-election campaign and him being blocked from seeking medical treatment at a point.