What next after Rwanda-Uganda stalemate at all govt levels? 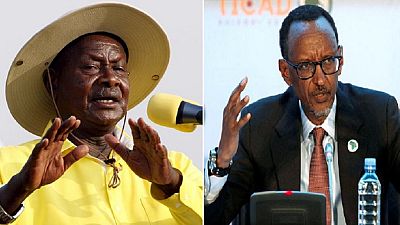 Citizens of Rwanda and Uganda are hoping that regional leaders from the East African region and beyond can intervene with a view of resolving the ongoing border and diplomatic standoff between the two governments.

On Wednesday, Uganda’s foreign ministry issued a statement clarifying that it has not closed its border with Rwanda. The same statement however listed several actions that have been taken by Rwanda to frustrate movement of goods and people across their common border, including ;

This is the latest installment of the border standoff that is two weeks old now. Rwandan authorities have repeatedly insisted that their common border with Uganda is open, explaining that the temporary restrictions at the main Katuna border crossing are to facilitate ongoing refurbishment of the border post.

Rwandan authorities, including president Paul Kagame have however explained that the ongoing diplomatic tussle with Uganda, has been going on for two years now, hence recent actions including a travel advisory issued against Uganda.

In this article, we look at the different government officials from both countries, who have issued statements about the standoff, and explore possible ways of resolving the dispute.

Opondo disputed Rwanda’s claims that Uganda was holding its nationals ‘incommunicado’, and challenged the minister, Olivier Nduhungirehe to provide names, passport numbers and locations of the said persons.

Nduhungirehe shared a list of about 20 names and details including the dates they were reportedly detained, the days spent in custody and status.

Eventually, another Ugandan minister, Frank Tumwebaze advised the officials to stand down, reminding them that there are better channels to use, rather than having what he called ‘Twitter ping-pong’.

Twitter Ping-pong will not solve any issues, real or perceived btn our countries.There r better channels to use.Our Principals H.E KagutaMuseveni &H.E PaulKagame at their last bilateral mtg, advised us to TALK to each other on issues affecting our peoples. Let's heed to that https://t.co/hlk3IZdDdO

In the early days of the border restrictions, officials from Uganda and Rwanda called for calm, saying the countries’ foreign ministries were engaging each other to resolve the matter.

‘‘I have said before that those who try to destabilize our country do not know our capacity. It is big. Once we mobilise, you cannot survive if you are a trouble-maker,’‘ the president said.

The next day, Rwanda’s president seemingly responded to Museveni’s brash assertions, telling Rwandans not to accept to be brought to their knees.

‘‘You can attempt to destabilize our country, you can do us harm, you can shoot me with a gun and kill me. But there is one thing that is impossible: No one can bring me to my knees,’‘ Kagame told delegates at the National Leadership Retreat.

‘‘Men and women of my country, you should never accept that. You are much better than that.’‘

President Kagame:You can attempt to destabilize our country,you can do us harm,you can shoot me with a gun and kill me.But there is one thing that is impossible:No one can bring me to my knees. Men & women of my country,you should never accept that. You are much better than that pic.twitter.com/Dm9R1TkQqu

Several citizens of both countries and political observers have pointed out that the statements of the leaders of Rwanda and Uganda indicate that no progress is being made towards resolving their differences.

For every accusation and action taken by Rwanda, Uganda has insisted on its innocence and commitment to existing frameworks that guide its bilateral relations.

The East African Law Society, which works to promote regional integration, on Tuesday said it has mobilised diplomats, lawyers, and representatives from civil society and business, to help reconcile Rwanda and Uganda.

“We are separately reaching out to the heads of state of Rwanda and Uganda with the offer for mediation,” Willy Rubeya, the president of the legal body said.

The Arusha-based regional bar with more than 17,000 lawyers, has an observer status to the East African Community (EAC).

While many held out hope that Kenyan president Uhuru Kenyatta’s visit to Uganda and Rwanda on Monday was a mediation effort, it was later clarified in a press conference after the National Leadership Retreat that Kenyatta attended, that he was not a mediator.

Kenyatta had told delegates at the conference that ‘while challenges exist, with goodwill and good intentions’, they can be resolved.

Last week, the Assistant Secretary in charge of African Affairs for the United States, Tibor Nagy met with Kagame and Museveni, as part of his Eastern Africa tour.

While regional peace and cooperation were part of the discussions of both meetings, there has so far been no concrete diplomatic proposal to help normalise relations between Rwanda and Uganda.

An official of the East African Community regional bloc (EAC) reportedly told Ugandan newspaper Daily Monitor that ‘behind-the-scene efforts to normalise Rwanda/Uganda relations were underway although the involvement of the EAC is not visible’.

Kagame is the current chair of the EAC, having recently taken over from Museveni.