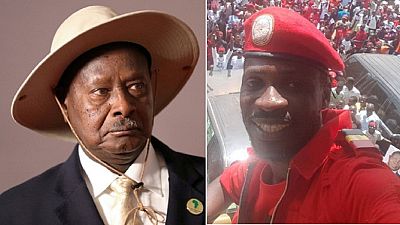 Uganda’s politics looks set to be as confrontational in 2019, as it was in the least year, as president Yoweri Museveni fends off a growing challenge from legislator and musician, Robert Kyagulanyi commonly known as Bobi Wine.

74-year-old Museveni, who has been in power since 1986, has been accused of suppressing the opposition in Uganda. His government was severely criticised in August last year, when Bobi Wine was arrested and brutally beaten by security forces.

In his address to Ugandans ushering in a new year, Museveni called out what he described as double-faced politicians, who are determined to stall the country’s progress through criminality.

When the struggle is over, we shall wear the victor's crown. We shall walk with swag in a new Uganda.

‘‘However, to behave in a double-faced way where you have one leg in constitutional politics (Parliament, Municipality, District council) and another in un-constitutionalism (Okuremesa, Okuseketerera, Okutemura, etc.,)cannot be allowed,’‘ the president said.

Bobi Wine, who became a member of parliament in 2017, is also one of Uganda’s leading musicians.

He has been tasked by several government operatives to make a distinction between Robert Kyagulanyi, the legislator and Bobi Wine, the musician.

Consequently, the 36-year-old hitmaker, has been prevented from staging music shows, even after parliament directed in December that the police were were acting unconstitutionally.

On the eve of the new year, Bobi Wine also released his message to Ugandans, in the form of a new music video titled ‘Tuliyambala Engule’.

‘‘When the struggle is over, we shall wear the victor’s crown. We shall walk with swag in a new Uganda,’‘ reads some of the lyrics in the song.

‘‘All the power in the hands of the people, that’s the promised land. They will no longer rule us by the gun.’‘

The song features several other popular artists in Uganda, including Irene Ntale, Pastor Wilson Bugembe, Dr. Hilderman and King Saha among others.

Music has been used on several occassions by both Bobi Wine and Museveni to rally the masses behind their political visions.