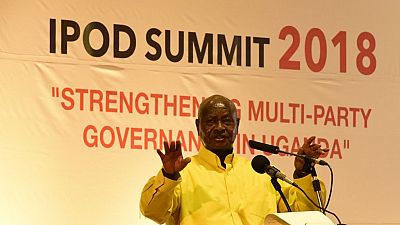 Yoweri Kaguta Museveni, President of Uganda has given his view on why Europe succeeded in colonizing African countries and not those in Asia.

Museveni, one of Africa’s longest serving presidents said it all came down to incompetence and bankruptcy of chiefs back in the day.

“On strategic security, the question is around making Africa secure. Why was Africa easily colonized yet the Europeans failed to colonize China, Japan?

We were colonized because of incompetence and bankruptcy of our chiefs. They wore lion skins, and other regalia but could not defend their continent against external aggression.

“We were colonized because of incompetence and bankruptcy of our chiefs. They wore lion skins, and other regalia but could not defend their continent against external aggression. Politics therefore should be about survival and destiny of our people,” he said in a tweet.

African countries were decades ago largely split between European colonizers – Britain and France being the main beneficiaries. Portugal and Belgium are other countries that colonized other African nations.

In the late 1950s a wave of struggles led to liberation movements that secured independence for most countries south of the Sahara. European nations however wield some ties with nations they once governed.

His comments posted on social media came after he met a section of Ugandan opposition parties for an inter-party dialogue. He jabbed a section of opposition he claimed had refused to attend the event.

The Inter-Party for Dialogue, IPOD, is a grouping of parties with representation in parliament. Museveni also addressed issues of security, torture and democratic gatherings within the context of other peoples’ rights.

“I have been accused of threatening to wipe out the opposition. Truth is, they are in danger of wiping out themselves because of miscalculation & leaving the NRM to offer solutions to all problems. As long as they oppose what Ugandans see as beneficial, they cause their own defeat

“On the issue of torture, we are against it. I spoke to the soldiers who were caught on video beating up people. I have given them guidelines but I urge political players to be disciplined.

“We also take issue at times with motive and message of these gatherings. We will not accept political actors who purport to use constitutional means to engage when actually they have another leg in unconstitutional arrangements. That we shall not allow,” he stressed.