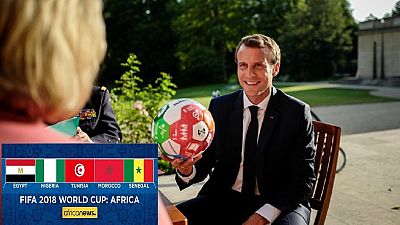 French President Emmanuel Macron will attend the soccer World Cup in Russia, the Elysee said on Friday, after France beat Uruguay to book a place in the semi-finals.

Hosting the World Cup has allowed Russian President Vladimir Putin to step up his diplomacy, securing a series of meetings with international guests on the sidelines of the tournament at a time when Russia is increasingly isolated on the global stage.

Macron said at an economic forum in St Petersburg in May that he would return to Russia if France reached the World Cup semi-finals, which the French team did earlier on Friday after defeating Uruguay 2-0.

We are happy that the president of France is coming.

Asked about Macron’s plans to visit Russia, a French Elysee official said on Friday: “Yes, he will go.”

The official said the Macron would travel only for the game, when France take on Belgium in St Petersburg on Tuesday, and that he had no other plans while in Russia.

The Kremlin said it welcomed Macron’s decision. “We are happy that the president of France is coming,” RIA news agency quoted spokesman Dmitry Peskov as saying.

Human rights groups have previously called for Western leaders to boycott the World Cup in Russia due to Moscow’s actions in Syria.