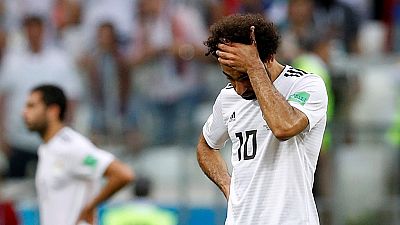 Saudi Arabia managed their first win at the 2018 World Cup by beating Egypt 2-1 with a last-gasp winner that eclipsed Egyptian talisman Mohamed Salah’s 22nd minute goal in Monday’s Group A game between the two eliminated teams.

Saudi Arabia finished third in the group standings, scoring their only goals of the tournament and vastly improving from the 5-0 thrashing by hosts Russia in their opening game.

It was a bitter disappointment for the Egyptian side, however, with Liverpool striker Salah unable to prevent three consecutive defeats for his country. Egyptian keeper Essam El-Hadary became the oldest player ever to appear at a World Cup at 45-years-old.

Saudi Arabia got back in the game with a penalty awarded just before halftime and Salman Al-Faraj scored from the spot. They then pulled off a win in the 95th minute thanks to Salem Al-Dawsari’s angled shot.

In the other Group A clash, Uruguay demolished 10-man Russia, clinching a 3-0 victory that earned them the top slot in the group.

Luis Suarez grabbed his second goal of the tournament to open Uruguay’s account with a free kick after 10 minutes and they doubled the lead with an own goal from Russia’s Denis Cheryshev soon after.

Edinson Cavani bundled home a third goal for Uruguay at the death to wrap up their third straight victory, ensuring they finished above the Russians, who will now have to face the winners of Group B in the last 16.