Zambians engage in 'Rights vs Morals' debate over sex dolls 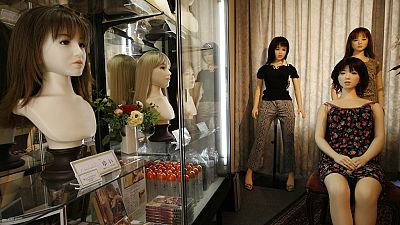 No one sells them openly, no one admits to owning one, and no one has been arrested, but Zambia is waging a fierce campaign against sex dolls.

The government launched the crackdown on the sex toys last month, threatening offenders with heavy jail terms over the dolls which, it says, are “very unnatural”.

The action has propelled the issue of sex dolls to the top of the news agenda and made them a hot topic of conversation and debate on social media, dividing opinion in the largely conservative southern African country.

I don't support the use of sex dolls but I still feel that one should be free to choose what one wants.

“Being a Christian nation, obviously we are anchored in Christian principles and one of the values is morality and ethics,” Minister of National Guidance and Religious Affairs Godfridah Sumaili told AFP.

Selling or using a sex doll is against Zambian law, she said, vowing to ensure they are not bought on the internet and imported.

“The use of sex dolls is definitely in contradiction to our natural heritage and our principles,” Sumaili added.

“The law actually forbids anybody to trade (in) and to use such objects — and so this is why we are saying for Zambians that this is a very unnatural thing.”

The minister said the ban was necessary after media reports emerged of sex dolls being imported into Zambia, apparently from Asia. Police are investigating, she added.

In recent months, Zambia’s independent and semi-official press have devoted many column inches to reports of sex shops popping up around the capital Lusaka selling sex dolls, as well as chronicling the backlash.

“God created man and woman for sexual satisfaction — but for a man or woman to use a lifeless object is immoral,” Sumaili said.

“Let’s not import foreign beliefs and experiences. Let us just believe in what we are.”

The manufacture of sex dolls has become increasingly sophisticated, with China developing custom-made “smart” dolls that can talk, play music and turn on dishwashers.

In Zambia, the dolls made of silicone were reportedly in a variety of shapes and shades, but an AFP reporter failed to find any shops selling them.

“The argument that the Bible does not allow the use of any objects is wrong,” said PEP party chief Sean Tembo.

“The same Bible encourages free will and it will be wrong to send someone to prison for choosing to use sex dolls. Some men have low self-esteem and cannot propose love.”

Tembo said sex dolls could even tackle the spread of HIV/AIDS — in a country with a 12.4 per cent adult infection rate.

“Men can use sex dolls and this will help reduce the cases of AIDS,” he said, contesting the minister’s claim they were illegal.

Zambia is a largely conservative nation, where homosexuality is illegal and anyone in an intimate same-sex relationship faces up to 14 years in jail.

Officials say that sex dolls fall under a constitutional law against making, owning, importing, selling or displaying “obscene matters or things” — punishable with a maximum prison term of five years.

No shops openly sell them in Zambia, though they are available from international internet suppliers.

The state-owned Zambia Daily Mail reported Sumaili’s campaign under the headline “No toying with sex dolls”, and later ran a feature on how the policy was a constant talking point on public minibuses.

“I would order a sex doll without hesitation,” the newspaper quoted one unidentified male passenger as saying.

“I am assured of a disease-free relationship because a sex doll will not cheat on me. They are not materialistic and will forever remain faithful.

“Government is now violating our privacy as citizens,” he said.

Lusaka resident, Jane Kaluba, 25, told AFP that sex dolls were a test of how best to balance morality with individual rights.

“I don’t support the use of sex dolls but I still feel that one should be free to choose what one wants,” she said.