All fixtures in Greece’s Super League have been suspended indefinitely, according to the government. The announcement comes the day after a match fell into chaos as team PAOK’s owner — one of the country’s richest men — came onto the pitch while apparently carrying a gun to protest a disallowed goal.

In the Sunday night incident in Thessaloniki, PAOK Salonika thought they had scored in the final minute of the match against AEK Athens to give them a 1-0 victory, but after initially seeming to allow the goal, the referee ruled it out for offside.

PAOK’s owner, Ivan Savvidis confronted the match officials with a gun protruding from a holster in his belt.

The game was suspended and the crowd was told to disperse. Adding to the widespread confusion, there were claims that the referee, Giorgos Kominis, had allowed the goal.

The Superleague’s website recorded the match as a 0-0 draw and showed AEK still leading the table on 55 points, with Olympiacos in second on 53 points and Paok still in third on 50.

Elsewhere in France, Lille fans invaded the pitch and attacked their own players during Saturday’s 1-1 draw with Montpellier.

TV footage showed supporters aiming kicks at some of the players after the final whistle of the Ligue 1 match.

Lille have won the Ligue 1 three times, having won the last title in 2011, and are currently one place off the bottom of the table. 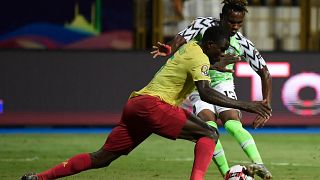