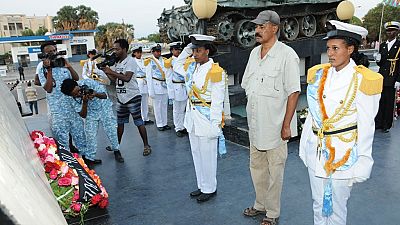 Eritrean President Isaias Afwerki on Monday (February 12) led a wreath laying ceremony to commemorate the 28th anniversary of a key military victory over Ethiopia in 1990.

Afwerki laid a wreath at the Martyrs Cemetery at port city of Massawa, where Eritrean fores fought to take control of the city in Operation Fenkel.

The operation was seen as a key turning point in the country’s armed struggle for independence against their more powerful neighbour. Three years down the line Eritreans gained independence from Ethiopia.

The country declared three-day celebrations staring February 9 – 11. It was under the theme: Fenkel, dawn of Liberation.

Information minister Yemane Meskel wrote on Twitter that the celebration was the: “Highest tribute to Eritrea’s best sons and daughters!”

The operation also known as the “Second Battle of Massawa took place in 1990 in and around the coastal city of Massawa in Eritrea. The offensive was conducted by both land and sea units of the Eritrean People’s Liberation Front (EPLF) against the Ethiopian Army.