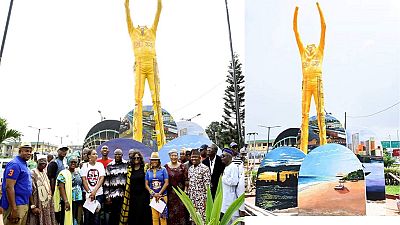 Nigeria’s largest city of Lagos unveiled a statue in honour of music legend and Afrobeat pioneer Fela Anikulapo Kuti who died on August 2, 1997 at the age of 58.

The Liberation Statue was brought to life by Nigerian artist Abolore Sobayo who used fibre glass to design the golden headless effigy of the legend with its handless arms raised into the sky.

Lagos State Governor Akinwunmi Ambode unveiled the statue on Sunday (October 15, 2017) – Fela’s 79th birthday – at the popular Allen Roundabout in Ikeja where it was erected.

Ambode extolled the virtues of the late legend the unveiling of the Liberation Statue in honour of Fela erected Allen Roundabout in Ikeja pic.twitter.com/L47vsZ59ks

The statue is part of activities marking the 20th anniversary of Fela’s demise.

“This artwork was created as a form of respect and remembrance to this legend; what he stood for and fought for with his music; his mythology; struggle for freedom; fight for human dignity; social consciousness; courage and Pan-Africanism,” the governor said.

“Today we celebrate a man who voluntarily turned his back on a life of comfort and privilege, and took up his saxophone as a weapon to fight for the liberation of our people from neo-colonialism and bad governance,” he added.

The unveiling of the Liberation Statue was part of activities marking Fela's 79th posthumous birthday and the 20th anniversary of his demise pic.twitter.com/P9iVhEiAoy

Fela’s daughter Yeni Kuti expressed gratitude to the governor and the artist for respecting the wishes of her father who hated statues by designing a headless and handless effigy.

“The artist has said it is a spirit and when Fela was alive, he hated statues and so I think this effigy is a good representation of what Fela would have wanted because he did not like statues and that is why at the Museum you will notice that there is no statue of Fela,” she said.

The ceremony ended at the New Afrika Shrine where the popular annual Felabration festival held in Fela Anikulapo Kuti’s honour came to an end.

Who is Fela Anikulapo Kuti?

Olufela Olusegun Oludotun Ransome-Kuti was born in 1938 to an educated middle-class family.

His father was an Anglican minister and teacher, mother was feminist activist and two brothers were medical doctors.

Fela was sent to London in 1958 to study medicine but diverted to music at the Trinity College of Music where he formed the band Koola Lobitos.

He later married in 1960 and moved to Nigeria in 1963 where he trained as a radio producer for the Nigerian Broadcasting Corporation.

The trumpeter re-formed his band in Nigeria which played a Jazz and Ghanaian Highlife fusion.

Fela moved to Ghana in 1967 where he named his musical fusion Afrobeat. The band played in the United States for months where Fela was attracted to the Black Power movement.

The band which was renamed The Afrika ’70 upon return to Nigeria, recorded music about social issues from the regular love songs.

Fela formed the Kalakuta Republic community which had a recording studio and served as a home for band members and other musicians.

He further opened the Afro-Spot nightclub which was later renamed Afrika Shrine where he regularly performed and promoted the African traditional religion of the Yoruba ethnicity.

He changed his name to Fela Anikulapo Kuti, started singing in pidgin English and declared his Kalakuta Republic independent from Nigeria.

Fela became popular among the Nigerian public and unpopular with the government at the time which ordered raids on his community. He was beaten, arrested, home, records and instruments torched among others.

He married 27 women, most of them his dancers in 1978 to stand against the authorities who accused him of kidnapping women in his commune.

His popular song Zombie, which was released in 1977 created a lot of buzz and notoriety against ruling governments in West Africa.

Riots broke out in Accra during the performance of the song which led to the banning of Fela from entering the country.

He formed the Movement of the People (MOP) political party to preach Africanism. He vied for the Nigerian presidency in 1979. His candidture was rejected.

Fela Kuti fell out with the regime of then General Olusegun Obasanjo in 1979, Muhammadu Buhari in 1984 and later Sani Abacha for songs including Zombie and I.T.T. (International Thief-Thief).

He spent 20 months in prison under Buhari for charges of currency smuggling which was regarded as politically motivated. He was released from prison by General Ibrahim Babangida.

Fela changed his band’s name to Egypt ’80 to educate Africans about Egyptian civilization. The band embarked on international tours in the United States and Europe where he performed with stars including Bono and Carlos Santana.

The 1990s came with more challenges affecting the band’s release of albums. Fela and four members of his band were arrested for murder in 1993 and released on bond. He denied the charges.

Fela went off the radar as rumours spread that he was suffering from AIDS.

He died on August 2, 1997 at the age of 58. His older brother Dr Olikoye Ransome-Kuti announced at a press conference that the immediate cause was heart failure, but he had suffered from AIDS.

His eldest son, Femi Kuti, has maintained and managed his father’s Afrika Shrine where concerts and musical activities are held almost daily.