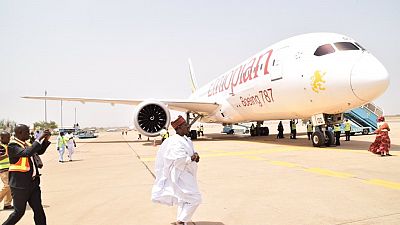 Nigeria’s Kaduna airport is now the main international airport for Africa’s most populous nation. This follows the official closure of the Nnamdi Azikiwe International Airport in the administrative capital, Abuja.

The closure is to allow a long overdue repair works on the runway which was formally announced by Acting President, Yemi Osinbajo. It took effect from 12 a.m. on Wednesday.

The Minister of Aviation, Hadi Sirika, was in Kaduna to receive the first international flight – Ethiopian Airline Boeing 787 – landed at the airport after midday. Kaduna airport is located about 160 km (100 miles) north of the capital.

The government confirmed that during the six-week closure, passengers traveling between Abuja and Kaduna were going to be given free bus and train services.

Busy day at the Kaduna International Airport as #KadunaAirport sets to receive the first international flight this morning #ABVClosure pic.twitter.com/SEBwvSesIn

Passengers traveling between Abuja and Kaduna will be provided with free bus and train services during the #ABVClosure https://t.co/eHWQdVelJh

Passengers and some airliners have complained about the new development saying it would affect their business schedules. Kaduna is also known for its notoriety with regards to kidnapping.

Abuja’s Airport handled an estimated 5,000 domestic flights in December alone, making it the second busiest airport in the country.

The shutdown is expected to cause severe flight disruptions but the decision has been forced due to the dangerous condition of the airport’s sole runway. An $18 million contract has been awarded for the repairs to an Abuja construction firm Julius Berger.