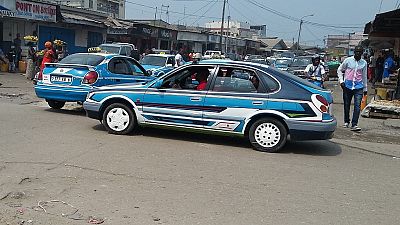 Transport is a crucial component of any socio economic undertaking. More so because people and goods need to be moved from one place to the other in order to facilitate trade.

Pointe Noire is the commercial city of the Republic of Congo, whose administrative capital Brazzaville has more often than not made the international headlines at the expense of the port city.

The city is reputed for its long coastline that hosts revelers and holiday makers. Its numerous round-abouts from the main market (Grande Marche) to the center of the city (Centre Ville) will not be lost on any visitor, never mind that their airport is so small.

Maybe because of the nonfunctional traffic lights, traffic police are almost always present at various intersections.

The colour blue and Toyota dominates the streets

A colour predominant on Pointe Noire’s roads is blue in its varying shades so that one does not miss it.

That colour and the globally acclaimed auto brand Toyota, are two elements that effectively combine and by extension link the city with the home of the Toyota brand, Tokyo.

When I asked a Congolese about the ‘Toyota invasion’ he replied, ‘‘I doubt if they have as many Toyota where it is produced as much as there is in Pointe Noire.’‘

So my first trip to Africa with our outstanding africanews team in #pointenoire pic.twitter.com/5GhyYWqyx2

The taxi proposition here is dual. The Toyota Corollas side by side the Hiace. So the same cars that pass for ‘matatu’ or ‘trotro’ in Kenya and Ghana respectively is classified a taxi in Pointe Noire.

The ‘normal’ Corolla taxis take a minimum of four passengers or a maximum of 6, other three seater types take eight passengers. And they come at an incredibly cheap price of between 100 ($0.25) and 500 CFA ($0.84) except that one almost pays for ‘discomfort.‘ The taxis are sprayed in shades of light blue and white.

The Hiace-type taxis take 17 passengers plus the driver and his assistant. There are painted with shades of blue lined with yellow. Then there are the public buses proudly draped with Congolese colours.

For the ‘middle to upper class’ roving taxis are a convenient means of zipping around Pointe Noire. More often than not at the cool cost of 1000 CFA ($1.68). With these ‘uniformed’ cars, the streets of Pointe Noire is a sight to behold when these cars get locked up at an intersection.

Whiles admitting no meaningful economic activity can take place without effective locomotion, when it comes to transportation in Pointe Noire, one cannot but admire the uniformed taxis and cheap cost at which the come.

So as the drivers’ assistant yells where they are headed or as the driver honks to draw the attention of motorists, just know that 99% of the time, that blue automobile is likely to be aToyota. The brand is at the heart of private commercial transport in the city.