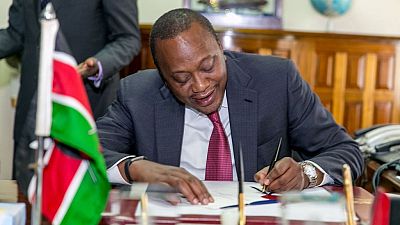 A bill capping bank interest rates in Kenya was recently signed into law to regulate applicable rates to bank loans and deposits.

President Uhuru Kenyatta signed into law the bill capping bank interest rates at 4 per cent above the Central Bank Benchmark Rate, currently at 10.5 per cent.

Assenting to the Banking (Amendment) Bill, 2015 at State House. pic.twitter.com/8UyDkJHucs

The new law now paves way for Kenyans who had been kept away from borrowing due to high lending rates.

“For me, myself, I have never applied for a loan, I will be applying for a loan for the first time because the rate is going to favour me. Like if I take 100,000 I pay 14,000 per annum, that is a very favourable rate, I think that is very best for me. I thank the president for that,” said Nairobi resident Simon.

Despite the arbitrary rate cap, the Kenya Bankers Association (KBA) has voiced its reservations stating that the law is not in the best interests of a majority of the people.

“Currently, the segment that will have been excluded when the law comes into place, because the easiest thing to do will be to retreat back to the safer bets, you lend to the high quality borrowers and effectively ignore the high risk ones and yet those are the drivers of economic growth in this country. Therefore we have to remain responsible, ensure that we still bring the SME sector into the fold of formal financial inclusion and and still operate within the new law,” said KBA CEO, Habil Olaka.

“However, we as the banking industry remain committed to addressing the fundamental issues that drive up the cost of credit,” read a statement by the umbrella body.

Meanwhile, the banks will comply with the law as they continue to provide financial services to their customers.
Banks have committed to reduce their lending rates in line with the reductions in the CBR announced in the recent meetings of the Central Bank’s Monetary Policy Committee.

However, some analysts believe that there is more that still needs to be addressed

“If government doesn’t borrow too much then we’ll have a lot of money chasing government securities. So at the end of it all they will still have to lend to the private sector. The only challenge is that some segments of the private sector are not going to get credit because probably their credit rating will not allow them to get this credit. I think the idea is, how will you be able to address these vulnerable groups and how can you ensure that these vulnerable groups continuously improve their credit rating in order for them to access credit,” said Research analyst, Eric Musau of Standard Investment Bank.

The government intends to monitor the impact of the new law as Kenya has one of the highest returns-on-equity for banks in Africa.

“We will closely monitor these difficulties, particularly as they relate to the most vulnerable segments of our population. Whilst doing so, my Government will also accelerate other reform measures necessary to reduce the cost of credit and thereby create the opportunities that will move our economy to greater prosperity,” said president Kenyatta.