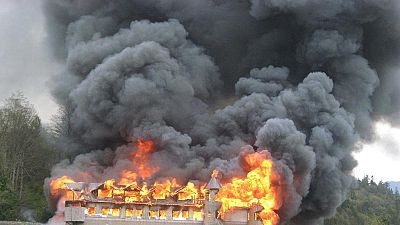 The recent wave of arson attacks in Kenyan schools has seen about 120 secondary schools torched, and authorities have identified the disturbing culprits; the students.

And while student arson attacks in Kenyan schools are not a new trend, the escalating rate of the fires has drawn attention from education stakeholders, and serious concerns are being raised on the motives behind the attacks.

According to some academic researchers and social science experts, the trend stems from indiscipline, in which parents are to blame.

Authorities are also accusing teachers of inciting students to start the fires. There are also claims that exam cheating cartels are behind the fires, as the said cartels are said to be under pressure from a new wave of reforms in the education sector to curb exam leakages.

Close to 150 students have been arraigned in children’s courts across the country and charged for arson and damage of property but parents have been negotiating with the state prosecutor’s office to settle the cases out of court.

“Settling it out of court means the parents will say, ‘how much will it cost? Each parent ten thousand and they will go back into their pockets’. So what will prevent the son and daughter from burning tomorrow or the following day? Let the individual culpable of burning face the consequence. Don’t pass it to the parent,” said Nderitu.

Public opinion is divided on what could be causing the crisis and what should be done to end it.

“Last year there was a lot of leakage and the minister also commented about it so this is making the students, as in, feel that the exam of this year will be more tougher, so they want to express this by maybe burning schools,” said business woman, Beth Kamau.

“A school which even schooled his dad or the mother… just coming and destroying within three minutes it is down, 40 years old dormitory. It is something we cannot take lightly as parents,” said Wilson Okumu.

“If we have a problem probably with our leaders, we have problem in the house and we don’t solve the problems amicably. Probably we demonstrate and we go to the streets and we burn shops, we burn also cars, then that is what we are telling our children to do,” said Patricia Muema.