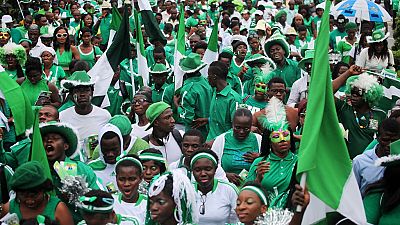 That Nigeria is Africa’s most populous country is not in doubt.

With a population of just over 181 million people, it is the seventh most populated country in the world, just after Pakistan at sixth position and China, India and the United States of America occupying the top three positions, according to the CIA world factbook.

But, the Population Reference Bureau projects that Nigeria’s 181.5 million population will shoot up to 400 million by 2050 making it the fourth most populous country in the world.

If God really blesses me and he gives me a good wife, I want to have about six children. Yeah because I am capable of taking good care of them.

In fact, the government should be worried about the population explosion, experts say.

President Muhammadu Buhari has planned a record $30 billion budget for this year which will be used to build roads, railway lines and improve the country’s erratic power supply.

The president also plans to spend $9 billion, three time more than in 2015, on capital expenditures. But experts warn that the country’s expanding population will overwhelm any new infrastructure that is built.

The commercial capital Lagos for instance, is home to about 23 million inhabitants, a number that has put a strain on resources there.

“Because of the unfavorable economic situation, we see more people coming into Lagos and that has put a lot of strain on our resources so we have to really provide more resources or more funds to be able to renew some of our facilities, to be able to provide additional infrastructure, and it’s been quite challenging. We can do with more funds and more revenue,” explained the Lagos State Commissioner for Budget and Planning, Ashade Jeremiah.

The cost of Nigeria's population boom https://t.co/OixwbD08dB via NewsRepublic

But how does the former federal capital plan to get the extra revenue? Taxes!

Lagos has a budget of roughly $3 billion this year but Ashade tells Reuters that more collaboration is needed.

As a result, “we need to really explore more the public private partnership” he said adding that “we also need to increase our revenue base, bring more people to the tax net so we can even have more funds.”

“But more importantly” for the Lagos state authorities “is that aspect of the public private partnership that we are really looking towards exploring and ensuring that we get more investment in those directions.”

By 2030, Nigeria’s population is expected to hit 300 million and to cope with the huge figures, the country would need to double the number of schools, hospitals or roads, according to the U.N. Population Fund.

But some analysts say that may be difficult to achieve given the dwindling oil revenues, which make up 70 percent of state income.

They say Nigeria’s economy would need to grow at double-digit rates for years to provide jobs, which the United Nations Population Fund’s assistance representative in Nigeria thinks is key in the fight against Boko Haram.

“We have a pool of young persons that are probably not very educated, and those who are educated do not have jobs to do, and so they become a ready army for the kind of insurgencies and disturbances we are seeing in parts of the country,” Osaretin Adonri of the UNPF said.

Nigeria’s population grows annually by 3.2 percent, the highest rate in Africa. And in spite of the warning, some Nigerians are still planning to have a big family.

“If God really blesses me and he gives me a good wife, I want to have about six children. Yeah because I am capable of taking good care of them, and like my parents, we were twelve so you don’t expect me to go for two children. Like six or seven” Antoine Osheme, a trader in Lagos told Reuters.

President Buhari’s predecessor Goodluck Jonathan, had called for birth controls but abandoned the idea as it generated public outcry.