Pelé had 3 marriages, 7 children and a very telenovela life 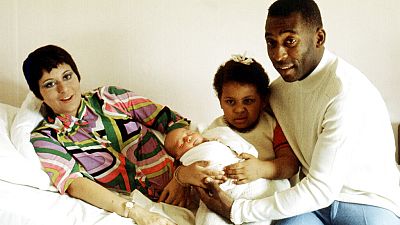 Married three times, officially the father of seven children: Pelé's private life, without being as eventful as that of Diego Maradona, was not straightforward.

"King" Pelé" recognized seven children, one less than Maradonna and, like his eternal Argentine rival, the Brazilian's life history has its grey areas.

He refused to recognise Sandra Machado, born in 1964 from an affair with a housekeeper. But after a five-year legal battle, the courts ruled in favour of the young woman in 1996. She drew a book, "The girl that the King did not want," before dying in 2006 of breast cancer at only 42. Pelé was then reproached by his two grandchildren for having "abandoned them intellectually, morally and materially."

From his first marriage to Rosemeri Cholbi in 1966 three children were born: two girls, Kely Cristina in 1967 and Jennifer in 1978, as well as a boy, Edinho in 1970. At this time, Pelé also had a daughter, Flavia, the fruit of an extramarital affair in 1968 with a journalist, Lenita Kurtz. Unlike Sandra Machado, he did recognise her in 2002.

The "official" family set up shop in New York in 1975 after Pelé's transfer to Cosmos. The three children would stay there with their mother after their parents divorced in the early 1980s.

Single, Pelé then fell in love with Xuxa, a young fashion model with a little-known past. She would become a television star in Brazil presenting programmes for young people and for a time sharing the life of the country's other idol, Ayrton Senna.

Pelé was an absent father for the three children from his first union. "When I lived in the United States, I had almost no contact with my father," Edinho testified in 2020 in an interview with Canal Football Club. "I only saw him two or three times a year for birthdays and Christmas."

Returning to Brazil at the age of 16, Pelé's son became closer to his father and embarked on a modest career as a goalkeeper. But it was his trouble with the law that made him infamous. Sentenced in 2017 to nearly 13 years in prison for laundering money from drug trafficking, he made several round trips to prison before being granted a semi-freedom regime at the end of 2019. He is now Londrina club's technical director in the southern state of Parana.

Pelé's second marriage, to a psychologist and gospel singer, Assiria Lemos Seixas, came in 1994. Two years later, they became parents to twins, Joshua and Celeste. The couple separated after 13 years together. In 2020, his ex-wife began legal proceedings for non-payment of child support.

In 2016, then aged 75, Pelé married for the third time to Marcia Cibele Aoki, a 42-year-old businesswoman, whom he had met in New York in the 1980s and then met again in an elevator in Sao Paulo. in 2010. A union described as "definitive love" by the legend of football.