Ethiopian and Eritrean forces on Thursday launched a massive "joint" offensive against areas of Tigray bordering Eritrea, say authorities in the rebel region in northern Ethiopia.

Ethiopia, "after repositioning a massive military force in Eritrea, has now launched a joint offensive with the invading forces of Eritrea" against northern Tigray, bordering Eritrea, the rebel forces' command announced in a statement.

The Ethiopian government and rebels in the Tigray region accused each other on Wednesday of opening new fronts in northern Ethiopia, a week after renewed fighting shattered a five-month truce.

The possible expansion of the conflict comes a day after a new air raid on the Tigrayan capital Mekele, the second since hostilities resumed on August 24, in areas of the Amhara and Afar regions surrounding the southeastern tip of Tigray.

In a statement issued on Wednesday morning, the Ethiopian government accused the rebels of having "extended their offensive to other areas" of northern Ethiopia, in the Wag administrative zone (northeastern Amhara), in Wolkait, a district of western Tigray, and in areas of western Amhara bordering Sudan.

When asked by AFP, Getachew Reda, spokesman for the rebel authorities in Tigray, accused the "Abiy regime" of having "launched an offensive in these areas".

No confirmation of fighting in these areas could be obtained immediately from independent sources. Journalists do not have access to northern Ethiopia, making independent verification impossible, and telecommunications networks there operate randomly.

Claimed by the Tigrayans and the Amhara - the country's second largest ethno-linguistic population - the West Tigray administrative zone has been occupied since the end of 2020 by the regional Amhara forces, which are assisting the federal army in the conflict.

In its statement, the Ethiopian government did not mention this new strike, which it neither confirmed nor denied.

A humanitarian source who requested anonymity confirmed to AFP on Wednesday the night air strike on Mekele, without further details.

The rebel authorities in Tigray said in a statement that the raid had "caused light to serious injuries to civilians and material damage", without further details.

An earlier airstrike hit the town on August 26, killing at least four people, including two children, according to Dr. Kibrom, an official at Ayder Hospital, the main hospital in Mekele.

The rebels and UNICEF said a "kindergarten" had been hit, while the government said its aircraft only targeted "military sites.

Mr. Getachew said overnight that the new "night drone raid on Mekele" was not aimed at any "military target" and accused Ethiopian Prime Minister Abiy Ahmed of "killing children and innocent civilians.

On Tuesday, Getachew said the Tigrayan rebels, after initially "defending (their) positions," had launched a counter-offensive across the southern border of Tigray.

In its statement, the government said the army had "valiantly defended itself against attacks" by the rebels "in eastern Amhara.

In recent days, according to diplomatic, humanitarian and local sources, the rebels have advanced about 50 km into Amhara, approaching the town of Woldiya, as well as Afar.

On Tuesday, APDA, an NGO active in Afar, said it had already counted 18,000 people displaced by the resumption of fighting in the region and feared that their numbers would increase as the rebels "advance" towards Amhara.

Quickly defeated in november 2020 by troops sent by Mr. Abiy to dislodge the executive of Tigray, which challenged his authority and which he accused of having attacked military bases, the tiger rebels took back almost the entire region in mid-2021, thanks to a counter-offensive that saw them approach Addis Ababa.

They then retreated to Tigray, accusing the government of "laying siege" to the region, which the latter denies.

In recent days, the international community has increased its calls for dialogue. Since June, the two parties have repeated that they are willing to negotiate, but have not stopped disagreeing on the modalities of future talks.

Despite the resumption of fighting, the government said on Wednesday that it had "not yet ruled out the possibility of peace" and the rebels said the day before that they were "open to any negotiations".

The truce decided at the end of March had allowed the resumption of the delivery of humanitarian aid by road to Tigray, which had been interrupted for three months and which now seems to be threatened again.

The toll of this deadly war is unknown. But it has displaced more than two million people and plunged hundreds of thousands of Ethiopians into near-starvation conditions, according to the UN.

Tigray has also been without electricity, telecommunications, banking services or fuel for more than a year. 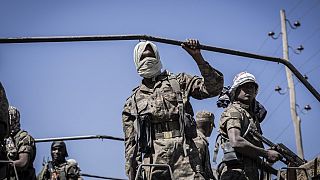