Angola's opposition leader on Monday disputed the provisional results by the electoral commission stating that they are wrong figures.

The main opposition party, UNITA, says it has proof that the results advanced by the CNE are incorrect and that the party has more than the 90 mandates

"UNITA does not recognize the provisional results," its leader Adalberto Costa Junior said at a press conference. He added, " "The CNE also cannot disentangle itself from what it has itself produced. These are minutes signed by everybody. They are formal documents not of UNITA, but of the National Electoral Commission. So it is not possible under any circumstances for the CNE to regurgitate to assume the result of the vote."

With 97 percent of ballots tallied, the national electoral commission said the People's Movement for the Liberation of Angola (MPLA) reached a majority with 51.07 percent of the vote.

The National Union for the Total Independence of Angola (UNITA) was the runner-up with 44.05 percent of votes.

Citing discrepancies between the official count and his own party's tallies, Costa Junior called for an international commission to review the tally.

"We can affirm with total assurance that the MPLA did not win the elections," he told a cheering crowd of supporters.

The MPLA has ruled the former Portuguese colony since it gained independence in 1975.

Wednesday's polls have been widely viewed as the most hotly contested in the country since multiparty elections were introduced in 1992. 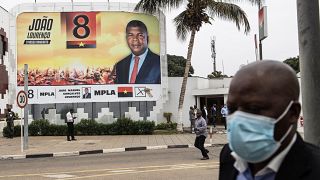