A nationwide curfew has been declared in Sierra Leone, following massive protests in parts of Freetown and other areas in the Northern part of the country.

Citing security souces Thursday, Reuters reported that six police officers were killed in anti-government protests in northern and western Sierra Leone when protesters descended into clashes between security forces and youth demanding the president resign, because of  "economic hardship".

Women who had gathered in the city centre Wednesday morning, holding placards, later fled the scene as tensions rose.

Dozens of protestors had been arrested, police said. A health worker at a hospital in Freetown said dozens of people had been injured.

In the Kissy neighbourhood in the east end of the city, demonstrators threw rocks and sticks at security forces, who fired tear gas in their direction, an AFP reporter saw.

Protestors were heard chanting "Bio must go", referring to President Julius Maada Bio, who is currently in the United Kingdom on a private visit.

The internet was temporarily blocked in Freetown on Wednesday afternoon, according to NetBlocks, a web monitoring group.

Demonstrations were also held in the city of Makeni and the town of Magburuka in the country's Northern Province.

⚠️ Confirmed: Real-time network data show that #SierraLeone is in the midst of a near-total internet shutdown amid anti-government protests in #Freetown; metrics indicate national connectivity at 5% of ordinary levels; incident ongoing ?

A press release dated the 6th August 2022, from the security sector says they monitored inciting social media messages calling for public demonstrations, but no group requested permission to hold such demonstrations cautioning against any planned demonstration calling on citizens to go about their normal business.

In his address to the nation, the Vice President says there have been attempts to overthrow the legitimate government of President Julius Maada Bio by some "Self Serving Sierra Leoneans."

"Government reaffirms its commitment to maintaining law and order including protecting the fundamental rights of the general public. The security sector has been authorised to fully enforce this directive" says Vice President Jalloh.

In early July, female market traders and the opposition politician Femi Claudius Cole were arrested on suspicion of intent to hold a separate demonstration over the rising cost of living.

Cole, the founder and head of the Unity Party, and some 50 other women were arrested but later released without charge.

For Fatmata Kamara who demonstrated Wednesday, it was important to make her voice heard: "I am a Sierra Leonean. We came out this morning to express our feelings to the United Nations, to say why we are suffering and what our problems are. One, we do not have freedom of speech, and two, there's no respect for us, the women, and our economy is down, down, down, and the costs of living are very high. Because of it, we are suffering, we are suffering."

The United Nations expressed concerns over the "violent incidents".

Sierra Leone's eight million people live has seen the cost of living rise by more than 40% within the last few months. 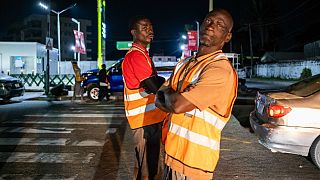 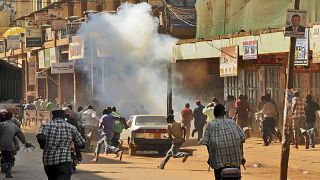