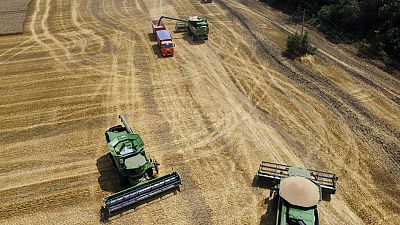 Poorer countries in northern Africa, Asia and the Middle East which depend heavily on wheat imports risk suffering significant food security due to Russia's war in Ukraine.

The conflict is poised to drive up already soaring food prices across the globe, the U.N. food agency warned on Friday.

Ukraine and Russia, which is under heavy economic sanctions for invading their neighbour account for one-third of global grain exports.

With the conflict's intensity and duration uncertain, "the likely disruptions to agricultural activities of these two major exporters of staple commodities could seriously escalate food insecurity globally when international food and input prices are already high and vulnerable," said Qu Dongyu, director-general of the Rome-based Food and Agriculture Organization.

In the statement, Qu said it was not clear if Ukraine's farmers will be able to harvest wheat ready for the market in June. In Ukraine, "massive population displacement has reduced the number of agricultural labourers and workers. Accessing agricultural fields would be difficult,'' Qu noted.

What the Russia-Ukraine conflict means for African economies [Business Africa] https://t.co/rGiicrJJZR via @africanews

Even if they could, Ukraine's ports on the Black Sea are shuttered and its government this week banned the export of wheat, oats, millet, buckwheat and some other food products to prevent a crisis in its own country and stabilize the market.

Ukraine's export ban doesn't apply to its major global supplies of corn and sunflower oil. It and Russia together account for 52% of the world's sunflower oil export market.

"It is still unclear whether (other) exporters would be able to fill this gap,'' Qu said, warning that wheat inventories are already running low in Canada.

The United States, Argentina and other wheat-producing nations are likely to limit exports as governments seek to ensure domestic supply, he said.

"Supply chain and logistical disruptions on Ukrainian and Russian grain and oilseed production and restrictions on Russia's exports will have significant food security repercussions,'' Qu said.

FAO cautioned that if the conflict triggers a "sudden and prolonged reduction" in food exports by Ukraine and Russia, it could further drive up pressure on international commodity prices "to the detriment of economically vulnerable countries." The U.N. agency said its simulations suggest that "the global number of undernourished people could increase by 8 to 13 million" in 2022-2023, particularly in Asia, sub-Saharan Africa, the Middle East and North Africa.

Shortfalls in grain and sunflower seed exports by Ukraine and Russia might only be able to be partially compensated by alternative sources, FAO said.

"Worryingly, the resulting global supply gap could push up international food and feed prices by 8 to 22% above their already elevated levels," FAO's report said.

According to FAO figures, food prices reached an all-time high in February. The COVID-19 pandemic already had a major impact on global food security, Qu said.

In 2021, global prices of wheat and barley rose 31% and rapeseed and sunflower oil prices jumped by more than 60%. Wheat prices have surged more than 50% since a week before the invasion.

Some consumers are already feeling the effects of a drop-off in exports as well as steep prices. In Italy, supermarkets in Tuscany and Sardinia are limiting sales of sunflower seed oil to two containers per customer, Italian state TV said. Spanish supermarkets are also rationing sunflower oil.