This vast arid land may seem a world away from the war in Ukraine, but communities here are reeling from the impact of Russia's invasion.

Ninety percent of Somaliland's grain comes from Russia and Ukraine.

The state has not had a delivery in three months and there's a risk of people losing one of their most important sources of food - bread.

Adding to this problem is unrelenting heat. The area is seeing its worst drought in 40 years.

In the village of Gideis where two-thirds of the inhabitants have left due to the conditions, mother Ianne, attempts to comfort her malnourished 7-week-old-Decca.

"The drought we are facing you can see is widespread and biting, from east to west. Of all the droughts I've gone through, this one is the worst," said Ismail Mahmood, who lives in Gideis.

He warns of the knock-on effects of the lack of grain.

"Everybody will lose his job also our Somalia population, how will they get food?" he says. "As a company we are affected by this war (in Ukraine). That's it."

The cost is not just felt by villagers and their families, animals such as camels, which play an important part in the livelihoods of the areas, are suffering too.

Sky News traveled to Geyodadheer, where half of its people have been left unable to support themselves after the deaths of livestock.

Two of the three wells have also run dry.

Despite camels being sharply adapted to their own environments, even they are not able to withstand extreme heatwaves

The entire horn of Africa could also be affected and aid agencies have warned that soon a famine will be declared if more funding is not raised. 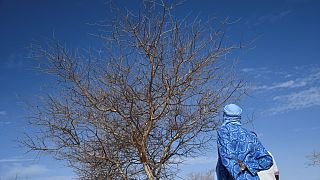 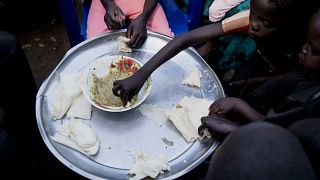