Mali ended Thursday's group stage at the top of Group F by beating Mauritania 2-0 without being worried, unlike Tunisia, which also qualified but was beaten in the end of the suspense by Gambia 1-0.

Gambia, playing their first-ever AFCON, continue their surprising adventure in the tournament by finishing second in the group.

Against Tunisia, the Gambians made their magic speak: globally dominated by the "Eagles of Carthage", they scored the only goal of the game by Ablie Jallow, author of a splendid half-volley which was lodged in the top corner (90th+3).

Before that, the Tunisians could have taken the lead, but Seifeddine Jaziri saw his penalty saved by Gaye (45th+1), the Gambian keeper. The Tunisians have missed a penalty in each of their three games ...

In the aftermath, the exclusion of the substitute keeper of Tunisia Farouk Ben Mustapha (45th + 3) added confusion to the match.

By dint of dominating without scoring, the Tunisians were punished. It must be said that they were deprived for this match of twelve players, positive to Covid-19, including their star Wahbi Kazri.

They reach the finals by the smallest of margins, finishing among the four best third, and will face Nigeria on Sunday (20:00).

Gambia will have to defeat Guinea on Monday. to continue its adventure in the competition.

In the other match of group F, Mali had no trouble to win against Mauritania, already eliminated, thanks to goals from Massadio Haïdara in the second minute and Ibrahima Koné on penalty (49th).

The Malians will face Equatorial Guinea on Wednesday. 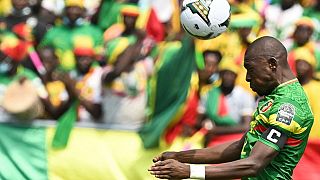