Egypt coach Carlos Queiroz said Tuesday he will not be swayed by critics of his underperforming team as the seven-time Africa Cup of Nations champions target a spot in the knockout rounds.

The Pharaohs take on Sudan in Yaounde on Wednesday knowing a draw will be enough to send them through to the last 16, where they would face the winners of Group E, and a possible showdown with Ivory Coast.

Egypt lost 1-0 to Nigeria in their opening match in Garoua but bounced back to beat Guinea-Bissau by the same scoreline thanks to a goal from star man Mohamed Salah.

Queiroz has come under fire for his tactics, with Egypt yet to hit their stride and demonstrate they are capable of ending a 12-year wait for another continental crown.

"The only thing that didn't change is criticisms for ourselves (coaches)."

"The coach can't make a magic situation," he added.

"We're doing our best and people on TV or in the media criticise. This is part of the show, we need to be ready for this event."

Asked to explain Egypt's strategy and positioning of players, Queiroz dryly replied that was not his problem.

"I advise you to hire some experts to read the game and then you will see in which formation we play," he said.

Meanwhile, the Super Eagles face Guinea-Bissau in their final group game in Garoua on Wednesday having already secured a place in the last 16 as winners of their section with two victories from two outings, including one over Mohamed Salah's Egypt.

"I wanna say that tomorrow's match is a decisive match. If Guinea-Bissau wants to advance/pass, it has to win the game, it's our obligation. I think we're focused on that. We're going to do our job/give our best, as always, so that in the end we make a good (happy) result," said Baciro Cande, Guinea-Bissau coach. 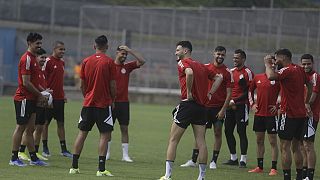