The criticism of western countries percieved involvement in the Ethiopian civil war rose to new levels on Thursday when thousands of protesters marched on the American and British embassies in the Ethiopian capital Addis Ababa.

Protesters called on U.S. President Joe Biden to "revise his foreign policy" and accused foreign governments of planning "to dismantle the sovereignty of Ethiopia."

The demonstrations come a day after the Ethiopian government announced that Prime Minister Abiy Ahmed travelled to the front lines of of the battle against fighters from the Tigray region.

The Tigray forces, who had long dominated the national government before Abiy came to power, appear to have the momentum in a war that has killed tens of thousands of people over the past year.

They’ve approached the capital of Addis Ababa in recent weeks with the aim of strengthening their negotiating position or simply forcing the prime minster to step down.

Abiy previously said martyrdom might be necessary and has invited Ethiopians to join him.

The prospect of the ancient nation breaking apart has alarmed both Ethiopians and observers who fear what would happen to the often turbulent Horn of Africa at large.

Countries including the U.S., France, Germany and Turkey have told their citizens to leave immediately. 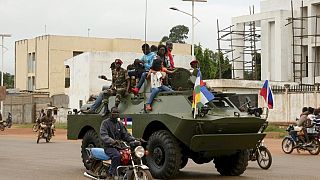