They suckle from a bottle, purring faintly: barely a few weeks old, the puny cheetah babies are the object of all the attention. They have just been rescued from the clutches of traffickers, escaping from a growing illegal trade in the Horn of Africa.

On average, only half of the cubs rescued from trafficking manage to survive, and members of the Cheetah Conservation Fund (CCF) are worried about the smallest of the group, the frail "Green" who weighs barely 700 grams.

"Green" and his fellow cheetahs were lucky. Each year, an estimated 300 baby cheetahs are shipped through Somaliland to be sold in the Middle East to wealthy buyers looking for exotic animals.

Taken from their mothers, shipped from Africa to war-torn Yemen and then to the Gulf, the cheetah cubs can fetch up to $15,000 each on the black market.

But to do this, they have to survive the journey, during which they are usually malnourished, confined in tiny cages, sometimes with their legs tied.

Less known than the traffic of elephant ivory or rhinoceros horns, this trade is no less devastating for the most endangered feline of Africa.

A century ago, there were about 100,000 cheetahs in the world. Today, between human encroachment on their habitat and illegal trade, there are barely 7,000 left.

More than 3,600 live cheetahs were illegally traded worldwide between 2009 and 2019, according to a study published this year based on a review of hundreds of ads for baby cheetahs on social networks.

Their breeding being particularly difficult, capture in the wild is the only way to get them.

"At this rate (...) it will cause the extinction of the species in a very short time," warns Laurie Marker.

Cheetahs have been prized as pets and hunting companions since the Roman Empire.

Today, they are particularly sought after in the Gulf States. Like fine cars and wads of cash, cheetahs are flaunted in selfies by their owners as a sign of wealth.

There is an overbidding, a boasting," laments Laurie Marker, whose association is trying to raise awareness about the behavior in these countries: "One of our messages is not to "link" this kind of things on social networks.

Fighting this traffic is particularly complicated because it is centered around Somaliland, a self-proclaimed republic without international recognition and one of the poorest regions in the world.

This breakaway region between Ethiopia, Djibouti and Somalia struggles to control its porous borders, including 850 kilometers of coastline facing Yemen.

In recent years, seizures have skyrocketed with an increased government crackdown.

From a handful of cheetahs in 2018, the rescue of "Green" and her fellow cheetahs brings the number of cubs currently housed in CCF shelters in Hargeisa, the capital of Somaliland, to 67.

Laws criminalizing the sale of cheetahs have begun to be enforced: in October 2020, a smuggling ring was dismantled and a leading trafficker prosecuted in a landmark trial.

Under a UK-funded program, Somaliland is also sharing intelligence with neighboring countries and Yemen to prevent the exodus of this iconic African animal.

The government has also turned to rural communities, whose conflicting relationships with cheetahs fuel the trade.

Of 13 cubs confiscated between September and November, at least four had been captured by farmers who wanted to sell them to, they claim, pay back after their cattle were attacked by cheetahs.

"The next generation may never see a cheetah if this illegal trade continues," said former Somaliland foreign minister Edna Adan Ismail at an anti-poaching conference in September.

Ahmed Yusuuf Ibrahim is on a mission to make sure that doesn't happen.

The 27-year-old veterinarian learned how to get rescued cheetah cubs back on their feet.

Removed from their environment, the cheetahs will not be able to fend for themselves in the wild and will eventually be relocated to a natural enclosure on the outskirts of Hargeisa.

But in the meantime, Ibrahim pampers them and makes sure they get the amount of camel meat they need: "I take care of them. I feed them, I clean them. They are my babies. 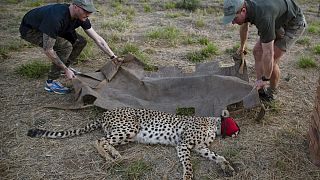