Six Kenyan police officers were charged with murder Thursday for the deaths of two brothers who died after they were arrested on August 1 in central Kenya for violating a curfew against Covid-19.

The deaths of Emmanuel Mutura Ndwiga and Benson Njiru Ndwiga, aged 19 and 22 respectively, sparked outrage in the country and led to demonstrations, some of them violent, denouncing police brutality.

The six police officers, four men and two women, pleaded not guilty when they appeared in a Nairobi court on Thursday. They will remain in custody until their parole applications are considered on September 22.

The Ndwiga brothers were last seen alive on the first Sunday in August, when they were arrested by police for allegedly violating the country's curfew between 10:00 p.m. and 4:00 a.m. Their bodies were found two days later in a police station.

Their bodies were found two days later by family members at the local morgue, according to rights groups.

Police in the central city of Embu said the two young men had jumped from a moving vehicle, a claim categorically rejected by the victims' relatives.

Their deaths triggered protests in Embu County, during which a police vehicle was set on fire. At least one person died after police opened fire to disperse the protesters.

Rights groups have denounced what they describe as a "twin pandemic" of police violence in Kenya, which has accompanied the nationwide curfew against Covid-19 instituted in March 2020 and regularly renewed since.

"We sadly note that this is not the first death resulting from police enforcement against Covid-19," the Police Reforms Working Group, a coalition of civil society groups, said last month.

A total of 25 suspected deaths related to Covid-19 measures have been documented, according to a statement from the organizations.

In mid-August, police announced they were opening an investigation into the death of a 38-year-old motorcycle cab driver, who was allegedly beaten to death by police for violating the curfew.

The discovery of his body in the Kayole district of eastern nairobi also led to violent protests, with roads blocked by fires and looting of stores. 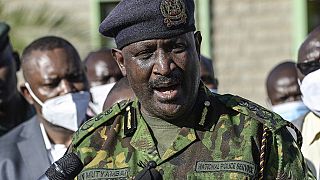