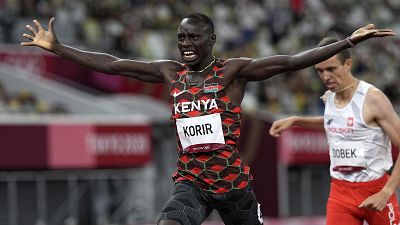 Emmanuel Korir won gold and led a Kenyan one-two finish in the 800 meters at the Olympics.

Korir pushed his way past Australia’s Peter Bol on the last turn and surged home to win in 1 minute, 45.06 seconds. It was Kenya’s fourth straight victory in the 800 at the Olympics.

Teammate Ferguson Rotich took silver with a late kick to overtake Poland’s Patryk Dobek, who held on for bronze ahead of Bol.

Kenya has claimed this title at every Olympics since Beijing 2008.

World-record holder David Rudisha won the last two Olympic gold medals in the 800 but he didn’t make Kenya’s team this year because of long-term injury problems. Clayton Murphy of the United States, the bronze medalist in 2016, finished last.

Meanwhile, Peruth Chemutai of Uganda made her move on the last lap and pulled away for the win in the women’s 3,000-meter steeplechase final at the Tokyo Games.

Chemutai set a new national record with her time of 9 minutes, 1.45 seconds. American Courtney Frerichs took off from the pack with around 2 1/2 laps to go. She was chased down by Chemutai but held on down the stretch for silver. Hyvin Kiyeng of Kenya was third.

Emma Coburn of the United States was disqualified for what was listed as a lane infringement after finishing behind the field. She earned bronze at the 2016 Rio de Janeiro Games.

The 22-year-old Chemutai finished fifth at the 2019 world championships in Doha.

Frerichs was a silver medalist at the 2017 world championships in London.