A six-year-old boy is on a mountain hiking challenge from which he is raising funds for sanitary towels that are distributed among vulnerable school girls in Uganda.

As he nurtures a mountaineering career, Ray Tumuhimbise, is setting a record in the Country’s tourism sector as the youngest hiker ever.

He has scaled the peaks of some of Uganda’s toughest mountains, and for a noble cause

“I like the project because of helping girls” said Ray.

Little Ray gained attention after scaling the renowned Mountains of the moon – Rwenzori range which lie along the Uganda-Congo border. He later conquered the 13,540ft Mount Muhavura in less than nine hours.

Climbing up this mountain can be strenuous, and it takes about ten hours to get to the summit. But for Ray, every single step taken, is another sanitary towel purchased.

“Ever since it started in the school there has been a great change both in the attitude and health status of the girls. They no longer get scared of periods because they know they are covered for the day.” delcared Promise Nowe, kamuganguzi Janan Luwum secondary school.

Ray has attracted locals to take up hiking.

As he prepares to report back to school, he is equally muscling up for his next task – climbing Mount Elgon which is 4,321 meters high.

Raziah Athman, Africanews correspondant at the mount Muhavura base, in Kisoro, Uganda. 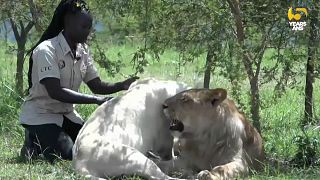 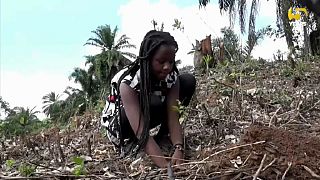