Rolling around and play fighting with a pair of hyenas is all in a day's work for Holly Oliver Akello, a wildlife handler at the Conservation Through Commercialization Center (CTC) in Butambala, Central Uganda.

Founded in 2014, the center boasts lions, hyenas, crocodiles, bat-eared foxes, serval cats, African golden cats, African palm civets, snakes, tortoises, chameleons and iguanas. And all of these beasts are placed under the care of Akello.

From one cage to the next, Akello is greeted by the animals, as they happily roll around with her like a dog welcoming home its owner.

23 year old Akello - or Snake Girl as she prefers to be called - calls each of the animals by name, and remains calm despite the danger many of these creatures can pose.

"I don't really let fear rule my life and I don't live my life at that side of fear because I believe that we are supposed to really be free enough and able to freely interact with whatever we can interact with" she says.

"I am not afraid of wildlife because I think if you are able to understand them it becomes so easy for you to work with them and if you have the patience and passion to work with them it makes it so easy to handle wildlife."

CTC is home to some of the world's deadliest beasts, kept away from most humans in cages and enclosures.

The lions, which were born in captivity in South Africa, were brought to Uganda 4 years ago.

But as with most of the animals Akello walks into their enclosure at ease then sits down and play s with them.

The animals can still be unpredictable however, and Akello bears scratch marks on her arms which she describes as "beautiful" since she believes the animals don't in tend to harm her.

Lunchtime can be particularly challenging. The lions do not entertain guests at their mealtimes… apart from Akello! After serving the wild cats their bowl of chicken she sits down and talks to them.

However she stresses that it's essential you know what you're doing before considering getting close to such creatures. 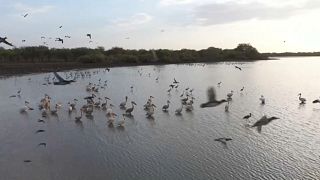 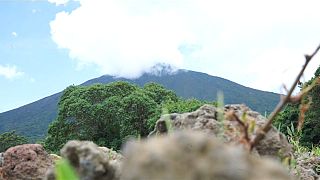