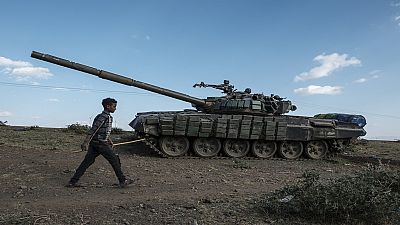 The U.N. humanitarian chief warned Thursday that the grave humanitarian crisis in Ethiopia’s embattled Tigray region is deteriorating, with no sign of Eritrean troops withdrawing and alarmingly widespread reports of systematic rape and other sexual violence mainly by men in uniform.

“This should alarm us all,” Lowcock said in his briefing, obtained by The Associated Press. “It is a sign of what lies ahead if more action is not taken. Starvation as a weapon of war is a violation.”

No one knows how many thousands of civilians or combatants have been killed since months of political tensions between Ethiopian President Abiy Ahmed’s government and the Tigray leaders who once dominated Ethiopia’s government exploded in November into war. Eritrea, a longtime Tigray enemy, teamed up with neighboring Ethiopia in the conflict.

Lowcock said humanitarian organizations had hoped things would improve after Abiy announced in late March that Eritrean troops would leave Tigray, but he said neither the U.N. nor the aid groups it works with have seen any proof of withdrawal.

“We have, however, heard some reports of Eritrean soldiers now wearing Ethiopian Defense Force uniforms,” he said. “And regardless of uniform or insignia, humanitarian staff continue to report new atrocities which they say are being committed by Eritrean Defense Forces.”

As an example, Lowcock cited an Amnesty International report that Eritrean troops killed three people and wounded 19 Monday “in an unprovoked, indiscriminate shooting attack on civilians in Adwa town.”

There are also reports of militias from neighboring Amhara attacking civilians in western Tigray and driving them from their home while Amhara authorities restrict access to those who fled, he said.

As for reports of sexual violence, Lowcock said one unnamed agency reported that 30% of all incidents against civilians involved some sort of sexual violence and nearly 25% of reports received by another involved gang rape, “with multiple men assaulting the victim,” sometimes repeatedly over a period of days, and with girls as young as 8 years old being targeted.

Lowcock said he is left to conclude “that there is no doubt that sexual violence is being used in this conflict as a weapon of war, as a means to humiliate, terrorize and traumatize an entire population today and into the next generation.”

He said humanitarian needs are still growing because “since the conflict began, civilians have endured indiscriminate shelling of towns, targeted violence, mass killings and executions and systematic sexual violence as a weapon of war.”

“Improvements in access and a reduction in conflict and atrocities have often proved temporary and sporadic,” Lowcock said. “So they are getting hungrier and sicker.”

“To be very clear: The conflict is not over and things are not improving,” he said.

Without a cease-fire, Lowcock said, the humanitarian crisis “is only going to get a lot worse.”

Despite these difficulties, humanitarian organizations have reached more than 1.7 million people with some form of aid, but he said more funding is needed.

Lowcock said agencies have allocated about $280 million of what the U.N. thinks will be more than $400 million needed to respond to Tigray’s humanitarian crisis, and he thanked the United States for announcing about $300 million for the region.

The Security Council has discussed the situation in Tigray behind closed doors before but has not been able to agree on even a press statement because of opposition from its African members and Russia and China, diplomats said, speaking on condition of anonymity because discussions have been private.