A renowned Algerian scholar on Islam was on Thursday handed a three-year jail time for offending Islam.

Said Djabelkhir has pledged to appeal the ruling and fight for freedom of thought as he was released on bail.

"The verdict I heard from the lawyer, was that I have been sentenced to three years in prison and fifty thousand (Algerian) dinars as a fine, we will appeal this verdict", Djabelkhir said.

His lawyer Moumen Shady, was also expressed shock at the ruling, describing it as ‘’harsh’’.

"The sentence given is three years in prison. I think it is a very harsh sentence, a wrong judgement. I did not understand how a first-degree judge issued this ruling and on what grounds he justifies this sentence of three years in prison? We were assigned to this case, and we saw that it is devoid of any evidence and there is no real offence", Shady said.

The author of two well-known works, was criticized for writing that the sacrifice of sheep predates Islam.

He also criticized practices including the marriage of pre-teen girls in some Muslim societies.

"Unfortunately, here in Algeria, we do not recognise research, we are not in a society that allows us to talk about and criticise religion, while everything should be subject to criticism or review."

The Algerian law stipulates a three to five-year prison sentence and or a fine for "anyone who offends the Prophet or denigrates the dogmatic precepts of Islam, whether it be by writings, drawings, a statement or another means".

During his trial in April, Djabelkhir defended himself against accusations that he had "harmed Islam", the religion of the Algerian state. He argued that he had only provided "academic reflections".

Djabelkhir has said that he was targeted by accusers who "have no expertise on religious matters".

His lawyers argued before the court that the complaint against him was inadmissible because it came from individuals and not from the public prosecutor.

They also warned against the trial becoming a launchpad for courts becoming an arena for "religious debates".

Djabelkhir has received the backing of many academic colleagues and Algerian politicians since the accusations against him surfaced.

Critics, however, accuse him of disrespecting the Koran, the Holy Book of the Muslim faith, and the five pillars of Islam, including the annual hajj pilgrimage to Mecca. 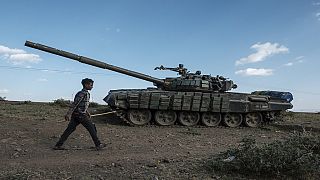