Mohamed Bazoum has taken the oath of office as president of Niger republic. The swearing-in ceremony was held at the Mahatma Gandshi conference centre in Niamey Friday afternoon. It comes despite a failed coup earlier this week.

This is** Niger's first democratic transition of power since independence from France in 1960.**

Outgoing President Mahamadou Issoufou who stepped down after two five-year terms handed power over to Mohammed Bazoum. Bazoum, the 61 year old former interior minister had been the right-hand man to Issoufou.

A coup attempt failed on Tuesday night after a military unit tried to seize the presidential palace. The assailants, from a nearby air base were reported to have fled after the presidential guard met their attack with heavy shelling and gunfire.

Government spokesman Abdourahamane Zakaria said several people had been arrested while others were still being sought but that the situation was under control.

"The government condemns this cowardly and retrogressive act that aims to endanger democracy and the rule of law to which our country is resolutely committed," he told a news conference. Niger has witnessed four military coups since independence.

On Wednesday, outgoing president Mahamadou Issoufou presided over the swearing-in ceremony of two new members of the constitutional court, and bid farewell to the presidential staff.

It was the constitutional court that validated the run-off election results in February which declared Mohammed Bazoum winner over rival, Mahamane Ousmane.

Ousmane is still contesting the results and on 22 March, he called on the opposition not to sit in the national assembly and on the army to disregard orders from an “illegal and illegitimate” authority.

Mahamane Ousmane, a former president has refused to concede and instead taken his case to the courts, sparking mass supporter protests that have been since been quelled.

It remains to be seen if his call or his rejection of the election results has any impact on the attempted coup. 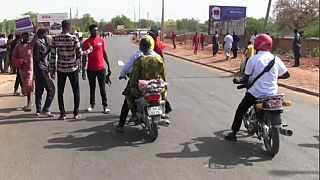