Kenya will not take part in the hearings due to start on Monday at the International Court of Justice (ICJ) in The Hague on its border dispute with Somalia, the Kenyan government announced in a letter seen by AFP on Sunday.

Somalia and Kenya have been at odds for several years over the delineation of their maritime border in the Indian Ocean, with a vast area of 100,000 km2 rich in fish and potential hydrocarbons at stake.

In the letter, sent to the ICJ, the UN's main judicial body, on Thursday, Kenya said it would inform the court "that it will not participate in the hearings" on the case, scheduled to start on 15 March.

Kenya's Attorney General, Kihara Kariuki, lists in the text the various reasons that led to this decision.

"Firstly, the circumstances of the COVID-19 pandemic hampered Kenya's ability to adequately prepare for the hearing," the letter said, also citing economic difficulties resulting from the pandemic.

The country also criticises the fact that some of the hearings are being held virtually, saying that this does not allow it to defend itself in the best possible way.

"Kenya humbly requests the Court to allow its (representative) to address the Court orally for 30 minutes before the start of the hearings," the text continues.

The country adds that it is willing to submit its position to the Court in writing, even if "the hearings will be held without the participation of Kenya".

This border dispute regularly poisons the already tumultuous relations between the two countries.

In December, Somalia announced that it was breaking off diplomatic relations with Kenya.

In February, Kenya recalled its ambassador to Mogadishu, accusing Somalia of auctioning off oil and gas fields in the disputed area - a charge it denies.

In 2009, the two countries agreed to settle their dispute through bilateral negotiations. But these were not successful.

As a result, Somalia referred the matter to the ICJ in 2014. Despite Kenya's challenges, the ICJ declared itself competent in February 2017.

Somalia has not yet reacted to the Kenyan decision. 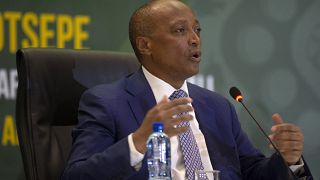