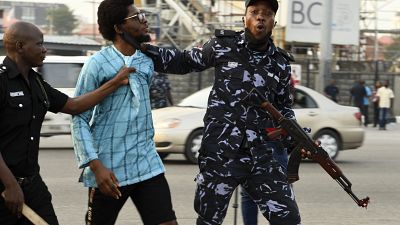 The Lekki tollgate in Lagos, Nigeria's sprawling megacity of 20 million people, has frozen in time since October when security forces shot at peaceful protesters.

At least 10 people were killed by security forces on October 20, Amnesty International said at the time, a charge Nigeria's army has denied.

Four months have passed since then, but signs of that brutal night are still visible at the tollgate: walls are riddled with bullets and glass windows are shattered.

Cars travel in and out freely but the company in charge of collecting the toll money has not yet returned. Red graffiti proclaiming #EndSARS is everywhere.

The hashtag, named after the SARS police unit accused of abuses, has come to represent the movement against brutality and bad governance that swept Africa's most populous country last October.

Dabiraoluwa Adeyinka, who was at Lekki on October 20, says some of her friends just want to forget, to erase what happened from their memories. But she says she "can’t afford to keep quiet".

"I was on stage, asking people to sit down and raise their flags, then they started shooting. Immediately people were falling," said the young woman, pointing to where she was standing, on the back of a truck that had been transformed into a stage. "I witnessed about six bodies lifeless on the floor."

Since then, she and her friends have been trying to help those who were injured that night, and to "be a voice for those who are afraid to talk".

With the backing of high-profile celebrities from around the world, thousands of Nigerians, largely young people, took to the streets last year in the biggest show of people power in decades.

Four months after, complete silence appears to have fallen on the movement, as those responsible for the killings are yet to face justice.

Key figures of the leaderless movement have been pressured by the authorities and subjected to intimidation, harassment and smear campaigns, according to Amnesty International.

This month, a Nigerian court ordered the Central Bank to unfreeze 20 bank accounts linked to demonstrations.

"There are more people coming in with panic attacks, as feared. Some are even afraid to move around because they have this idea that the police are going to shoot them."

Among the traumatised are those who survived Lekki but also those who followed it on social media -- the shooting was live-streamed on Instagram.

Despite the trauma, there was a timid effort to revive the movement last week, with fresh calls to occupy the tollgate and demand justice.

Last Saturday, about 40 protesters showed up at Lekki, and in front of news cameras, were swiftly arrested by the police that deployed in large numbers.

A police van had been parked just in front of the cameras, as if to encourage the filming of the arrests.

"That’s what they want, to scare us, everybody was saying to me 'don’t go there, you are going to be arrested!'" one protester cried out.

All were released on bail but remain under investigation for alleged breach of the peace.

Two days earlier, the authorities had warned protesters not to show up, saying an investigation into the Lekki shooting was ongoing.

Judicial panels have been set up across the country to investigate police abuses, including in Lagos to uncover what happened on October 20.

The army initially denied responsibility for the killings. They later admitted firing blank rounds to diffuse a crowd of people who defied a curfew. Real bullets were only shot in the air, they said.

Proceedings at the Lagos judicial panel have stalled, with representatives of the army failing to show up three times.

"The government is trying to silence people, to instill fear in us so that we don’t talk," Adeyinka said.

"I'm not afraid of anything, whatever it’ll cost for justice to prevail, for the dead to be heard, we’ll have to do it."