Clashes erupted in Tunisia for a fourth consecutive evening on Sunday.

In Ettadhamen, a neighbourhood close to the capital Tunis, the youth hurled rocks at riot police, who responded with teargas

Dozens in the capital and other cities have been arrested during the nationwide violent demonstrations which has seen shops and cars smashed and looted.

The protests began during the start of a coronavirus lockdown on January 14th, which was 10 years to the day since the autocratic leader Ben Ali fled from power.

But in this working-class neighbourhood no political slogans were heard and it is unclear what the young want.

"These aren't protests, it's young people who are coming from nearby neighbourhoods to rob and entertain themselves," said 26-year-old resident Oussama.

"A protest would be during the day, faces visible."

Abdelmoneim, a waiter at a nearby cafe, said those in the street were "bored adolescents", but blamed the violence on the country's post-revolution political class.

"These delinquents are the result of their failure," the 28-year-old said.

Despite the revolution a decade ago, many Tunisians are increasingly angered by poor public services and the political class, with high consumer prices, shrinking GDP and about a third of young people unemployed.

The health crisis and ensuing economic misery have pushed growing numbers of Tunisians to seek to leave the country.

Interior ministry spokesman Khaled Hayouni said earlier Sunday that dozens of young people, mostly aged between 14 and 17, had been arrested after they took to the streets during previous evenings, to loot and vandalise shopfronts and cars.

Sousse, usually a magnet for foreign holidaymakers but hit hard by the pandemic, also saw rioting.

Tunisia had been under a night-time curfew even before the recent lockdown, a four-day measure meant to expire on Sunday at midnight. 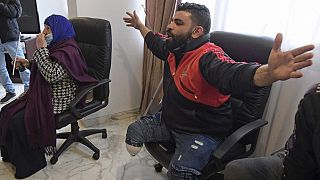 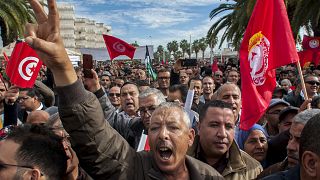