The history of the iron palace in Luanda remains shrouded in mystery. Historians say it arrived at the Port of Luanda in 1890, when the ship carrying it would have sunk in Angolan territory.

Some records indicate that the Commercial Company of Angola acquired the Palace at the end of the 19th century early 20th century.

"In this exhibition, we have mentioned several times a renowned architect of German origin, Otto Greger, because it was Otto Greger who has so far done the most comprehensive study on the Iron Palace", Arleth Leandro, Curator and Coordinator of the Iron Palace told Euronews’ Angolan Correspondent, Neusa e Silva.

Due to the palace's structure, its authorship has always been associated with the same architect of the Eiffel Tower.

Now new data appears! During the research for the preparation of this exhibition, an original piece of iron was found, with an inscription that refers to a factory in Scotland.

''This exhibition is a documentary exhibition and the facts do not point us to the connection between the master Gustave Eiffel and the work of Iron Palace. The facts point to a connection, at this moment, with a factory in Glasgow, which will have been responsible for the production of the irons and this is documented here'', Leandro added.

During the colonial period, the edifice was considered to be of great prestige and was used as an art center. After Angola's independence, it was classified as a Cultural Heritage Site. 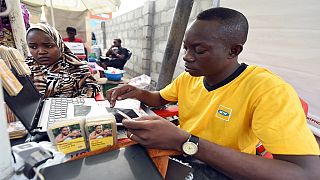