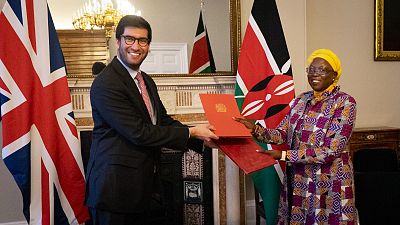 Kenya and the United Kingdom on Tuesday formally signed a trade agreement in London.

The trade deal will enable Kenyan exporters to continue accessing the UK market under a duty free, quota-free arrangement.

The deal specifically touches on fresh vegetables, coffee, tea and cut flowers although it could be expanded in the future to include textile, livestock and fish, according to Nairobi.

Both sides were eager to agree a deal before Britain formally exits the European Union (EU) on December 31.

“I am delighted that today we have signed a trade agreement with Kenya. This deal makes sure businesses have the certainty they need to continue trading as they do now, supporting jobs and livelihoods in both our countries”, said the UK’s International Trade Minister Ranil Jayawardena.

Kenya’s top exports to the UK include tea, coffee, vegetables and flowers.

The deal will become operational once the national assemblies of both countries ratify it. It includes clauses that allow other East African Community states (Uganda, Tanzania and Rwanda) to join in the future.