Coronavirus – Eritrea: Announcement from the Ministry of Health (3 March 2021)

The United States Secretary of Defense Mark Esper signed a 10-year military cooperation deal in Rabat, Morocco on Friday — two days after signing a similar deal in Tunisia as he made his final stop on a North African tour aimed at strengthening the fight against Islamist extremists in war-torn Libya and the Sahel-Sahara region.

Nasser Bourita, Morocco's Foreign Minister, shared a few words in a public address, “Our long-standing alliance has not only endured the test of time. We have stood side by side throughout the major challenges that shaped the 20th century, and we have transitioned into the 21st century stronger than ever."

A sentiment which seems to be shared by the States who sees Morocco as a key ally in this terrorist-challenged area of the continent. Esper followed in kind, "Now more than ever, our two nations are working closely together to tackle the challenges of an increasingly complex security environment - ranging from counterterrorism and other transnational threats to regional instability and broader strategic challenges."

The goal of Esper's visit was to reinforce mutual cooperation between the two nations as Morocco already hosts the largest annual US joint military exercise in Africa, "African Lion" — cancelled this year in light of the Covid-19 pandemic.

His visit came as talks between Libyan rivals were set to restart Friday evening in Bouznika, near Rabat, according to a Moroccan official. 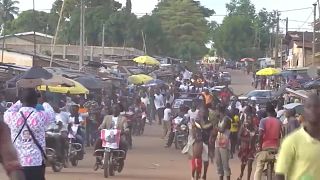