The Congolese political prisoner Jean-Marie Michel Mokoko has been authorised to fly to Ankara, in Turkey, to receive medical treatment.

Congolese human rights groups had called for Mokoko to be evacuated from prison due to his ailing health.

He ran unsuccessfully against Congo's President Denis Sassou Nguesso in 2016 and was imprisoned in 2018 for " violation to state security". 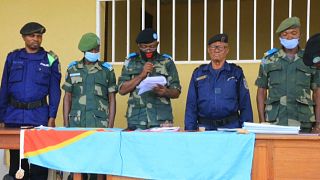