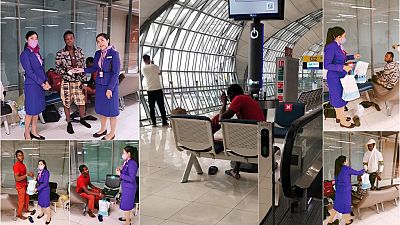 It started with a post on Twitter by a journalist, Richard Barrow. He tweeted some Nigerians had been trapped at a Thai airport. Unable to enter the country or to return home. He posted the episode on May 17.

It read in part: “Apparently there are some Nigerians who have been trapped at Suvarnabhumi airport for the last two months just like in the movie The Terminal. They cannot enter Thailand and they cannot go home.

“What is heartwarming are the ordinary Thais who are supporting them. Thank you,” the post was accompanied by airport workers supporting the stranded party with food.

The following day, he tweeted some an update on the issue: “UPDATE: Two arrived on 21 March on an Emirates flight with the intention to connect to Laos. The other one arrived on 24 March on Etihad with a connection to Myanmar. Unfortunately both of those countries closed their borders.

“None of them could travel back to Nigeria as that route was closed too. As they didn’t have a visa for Thailand (they were only in transit), they couldn’t enter the country. So, they have been trapped in the airport for nearly two months now.

He further disclosed that the airport authorities had been providing assistance such as food, drinking water and basic care. Airline staff have been helping them too. They had also undergone a COVID-19 test which was negative.

On May 18, the Nigerians in Diaspora Commission, responded to Barrow’s tweet saying there were going to liaise with the mission in Thailand to see how the stranded nationals could be helped.

Two days later, NIDCOM confirmed that a Nigerian consular officer and Thai immigration police had been to see them: “Our embassy in Bangkok is in touch with them and they will return home safely,” they added.

NIDCOM is a creation of the National Assembly and is an agency that is under the Ministry of Foreign Affairs. It basically provides a platform of engagement for citizens in the diaspora in the areas of policies, projects and participation in the development of Nigeria.

It also aims to better utilise “the human capital and material resources of Nigerians in diaspora towards the overall socio-economic, cultural and political development of Nigeria and for related matters.”

Nigeria has been repatriating a number of nationals in the wake of the COVID-19 pandemic. According tpo available records, so far; citizens have returned from the United States, United Kingdom, United Arab Emirates and Saudi Arabia.

Foreign Affairs Minister Geoffrey Onyeama confirms that more efforts were underway to bring back more citizens despite the challenges of closed borders across much of the world.

In February 2019, the BBC journalist in Ethiopia reported the story of a Nigerien national expelled from Israel who had been stranded at Addis Ababa’s Bole International Airport, in the Ethiopian capital, since November 2018.

Eissa Muhammad, had been denied entry into his home country and could not return to Israel due to documentation issues. He dreamed of a better life in Israel, but as an illegal immigrant he was removed after nearly 8 years.

The Ethiopian hub became home for nearly 4 months since. According to Muhamad, he paid traffickers to enable him across Libya and Egypt before entering Israel on foot.

Once in Tel Aviv, Muhamad survived by doing odd jobs in hostels and a candy factory until April 2018, when he was arrested for being in Israel without proper documents.

Expelled from Israel, stranded in Ethiopia: Headache of Niger man